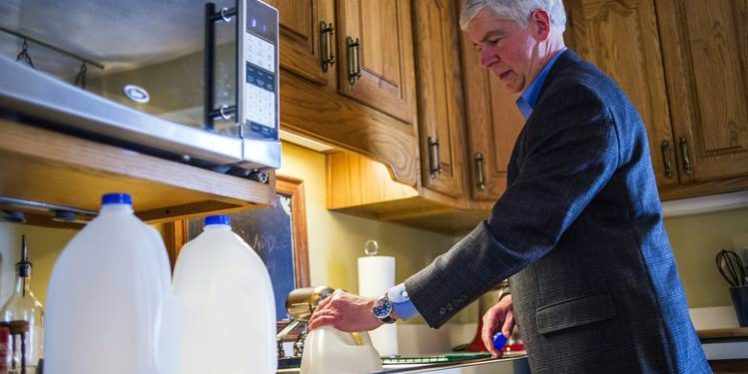 Back in April, Gov. Rick Snyder attempted to feign empathy for the people of Flint by claiming he would drink Flint water for 30 days.

Days after the announcement, Snyder left his post to travel to Europe where — unsurprisingly — he failed to live up to his own solidarity effort and didn’t drink Flint water.

Not only did Snyder’s self-imposed challenge come off as a tone-deaf and elitist game show stunt, no one believes he actually did it, regardless of what he tells the media. There’s no such thing as public trust with this governor anymore.

Snyder is now saying not only did he finish the 30-day challenge, he inexplicably claims to be still drinking the water.

In a less-than-masterful response to a question about his Flint water consumption, Snyder reportedly said: “I did it for 30 days plus in terms of such but I still have some and I’m still drinking it.”

Are we to believe that Snyder sips Flint water in the comfort of his multi-million dollar condo on the weekends with his brunch when no one is looking? Or he whets his whistle with the stuff between backroom meetings in Lansing? Does he have a Nalgene filled with it for car rides to and from work?

Why would he even want us to believe such a notion?

It’s because Snyder is desperate to look like he cares, but even a Flint water chugging contest can’t save him now.

His half-assed PR attempts at showing support for Flint residents have been just as abysmal as his and the Republican legislature’s watered-down attempts to fix the situation. People still can’t drink their water with 100 percent assurance that it’s safe. They still don’t trust Snyder or his managing of the Michigan Department of Environmental Quality. And people are still dealing with the trauma of fighting for years to get clean water for their families.

Snyder’s pursuit of good PR has devolved into a shameless spectacle of cult-like happy talk, meanwhile problems in Flint — and across the state — continue to go unsolved.