We’re in Quite a State 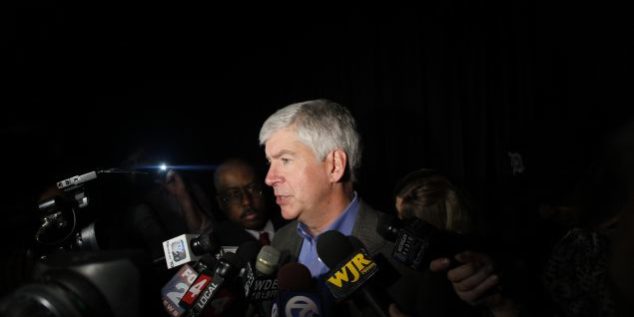 “Here’s an idea: rather than all of us creating our own GoFundMe pages to collect money to provide water, filters, and medical care for people in Flint, what if we just created 1 and we all donated to it? We could call it the ‘State of Michigan government’ or something like that. #‎FlintWaterCrisis

P.S. I bet we could raise money to build roads and schools that way too.”

This was a Facebook post my wife passed on to me and, not surprisingly, it led me to a line of thought about some quite fundamental issues at the heart of the poisoning of Flint families through the release of lead into the water supply. Obviously, the malfeasance of the Snyder Administration is at the heart of problem. Problems began with depriving the voters of their right to vote. The fact that most of the disenfranchised are African American and many are low income — people already struggling to live and be heard —only made it worse. Unfortunately, the Flint tragedy has many layers and one of them is the GOP desire to place as much public wealth into private hands as possible.

Though many of us initially thought it was purely a case of valuing tight budgets more than human need, saving money may not have been the main motivation behind changing the source of Flint’s water supply. At some point in this convoluted process, Snyder’s emergency manager for Flint declared that Flint could save money by switching from Detroit Water and Sewerage Department (DWSD) to the Flint River. This despite the fact that emails between Flint and DWSD show that Detroit was so desperate to keep Flint as a customer that DWSD offered to drop the price of the water to Flint by 45%, almost half. Flint would save $30 million over 30 years. The question is, if saving money was supposed to be the reason for switching from Detroit water to the Flint River, why didn’t the Snyder Administration take the cheaper deal from Detroit, a deal that would have saved even more money than what they were supposed to save by switching to the Flint River?

One reason might very well be that they wanted to see DWSD further hobbled by the loss of revenue. That would make the Detroit water system, already $25 million in the hole, a riper target for privatization.

The Republican fixation on neglecting, dismantling and destroying public infrastructure from roads to schools to public water systems is rooted in the drive to maximize private profit and control at the expense of the public good. “I’m alright Jack, keep your hands off mine!” “Everyone for themselves and devil take the hindmost.” Taken to its logical conclusion, this mindset destroys systems that everyone needs, the basis for civilization.

That brings me back to an idea at the other end of the political spectrum, the one in the FB post, the novel concept all us — wealthy, working class, working poor, affluent and otherwise — using state government to help cover human needs in the modern world. Instead of trying to slash and cut our way to a better future, we could take the adult route and face up to what it costs to do the right thing. Roads, schools, libraries, first-responders, hospitals and the like all require tax money.

There, I said it. Civilization costs money. What’s more, those who make the most money should pay their fair share. It’s called a progressive tax structure. That and much, much more — about $1.5 billion more — is what it’s going to take to make Flint a livable city again. That’s what it’s going to take to fix the pipes and give families water that doesn’t leave children with rashes and brain damage.

But what it’s really going to take is elected officials that value people, regardless of their color or income, above major campaign donors.