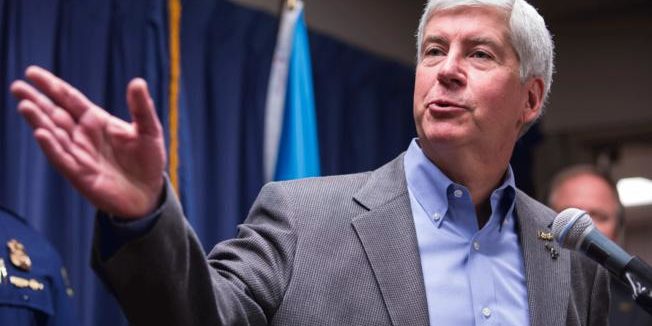 On February 16, Gov. Snyder posted a minute-long video of himself volunteering at Food Bank of Eastern Michigan in Flint. The video shows him touring the food bank, prepping food for distribution, and shaking hands and having conversations with other volunteers while the president of the food bank talks about how the food bank is helping to provide nutritional assistance in the Flint water crisis effort in the background.

We were actually at that food bank event and we saw a different picture than the highly edited, perfectly packaged video that was put out by Snyder’s spin factory. Here’s a run down: Snyder came in and the press was allowed to follow him around and take video and photos as he toured the facility. After the tour, he stopped at two stations in the distribution center that were obviously set up as photo ops, one was a station where volunteers were checking the expiration dates on cans of food and at the other volunteers were packing up boxes with food. The volunteers seemed very intentionally set up in their positions at each station for optimum spinability and Snyder only stopped to help at each station for as long as it took for the media to get adequate video footage and photos. After that, there was a press scrum where members of the media were able to ask the governor questions and where we captured this gem of a statement from Snyder on video, which Eclectablog wrote a perfect article about as well.

Meanwhile, the U.S. Surgeon General and his staff came to Flint last week and went directly to several Flint families’ homes to speak with them. He also hosted a public community meeting at a local church with several local leaders and health professionals where he had dozens of face-to-face conversations and answered questions from residents.

Snyder’s outreach to the community has consisted of tele-town halls and fabricated volunteer events. He has yet to travel to Flint residents’ homes or host any sort of public meeting to directly address residents’ concerns and communicate with people about his plans to address the crisis. But, hope is never lost. The Flint Rising coalition is hosting a public meeting on Saturday, March 5 and has invited Gov. Snyder, Senators Stabenow and Peters, and Congressman Kildee to attend and listen to residents’ concerns and present their plans of how they are going to address the water crisis. If Snyder really cares about the people of Flint, then he should make an effort to actually get out into the community and stop hiding behind these transparent shams of volunteer efforts.