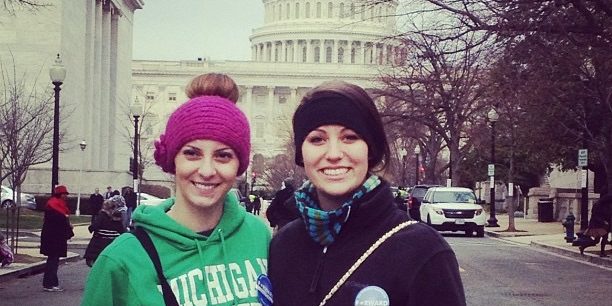 I remember the first time I saw you speak at Michigan State University in 2008. Thousands of students waited for hours in the rain. I was a new freshman at the time – 18 years old and getting ready to vote in my first presidential election ever. It was electric.

I remember standing in line on Election Day between classes, excited and nervous because I’d never voted before and had no idea what I was doing but I knew that this election would change history.

I remember the night of the election as I waited on edge with my friends in the dorm for the final results.

I remember that night you won the election, walking outside through campus and hearing the roaring cheers and celebrating of tens of thousands of students (myself included) that Barack Obama is President. Living history.

I wasn’t involved in politics before that election. Unlike many of my peers in the nonprofit and political sphere, my parents didn’t take me canvassing when I was a baby and I don’t recall hearing much talk of politics at home and minimally at school growing up. I’m the first in my immediate family to attend a university. Even my major at Michigan State focused primarily on the study of transnational politics and cultures.

You inspired in me what I know you inspired in so many others of my generation – to find some way to help others and to better peoples’ life situations – even if we didn’t know what we were doing, just like you when you came to Chicago at age 25 and started organizing.

I have grown watching you lead our country for the last eight years, from a teenager just starting college not knowing what I wanted to do with my life but knowing that I needed a college education to do anything, to a woman who has made a career in nonprofit and politics.

I know that some choices in your presidency haven’t been perfect and I haven’t agreed with every decision that you’ve made, but I also know that you were handed the keys to the White House while it was going up in flames, during the worst recession since the Great Depression. You have changed this country in ways that I don’t think another president could have – you’ve taught us to care more for each other, that we are all connected, and that despite our differences we all have common hopes and dreams.

I went back as I was writing this and watched your speech to your campaign staff when you won your reelection in 2012 and I felt the same overwhelming emotions watching it now as I did four years ago. I felt that you were speaking not just to the millennials in that room but to all of us. I felt the same inspiration that I always feel hearing you speak that motivates me to do this work:

“It’s not that you guys remind me of myself, it’s that you’re so much better than I was. You’re smarter, you’re better organized, and you’re more effective. And what Bobby Kennedy called the ripples of hope that come out when you throw a stone in a lake, that’s gonna be you…you’re gonna do great things. And that’s why, even before last night’s results, I felt that the work that I had done in running for office had come full circle because what you guys have done means that the work that I’m doing is important and I’m really proud of that.”

You’re the only president that I’ve ever voted for (twice). I’m afraid to let that go, especially looking ahead at presidential candidates like Donald Trump. But more than that, I’m hopeful because you have broken barriers; you made history as America’s first black president. You have helped shift collective consciousness in this country and taught us to question societal constructs that have historically been accepted as valuable. I know that one day a woman will be president, that one day a woman of color will be president, that if we’re willing to keep walking, eventually we’ll make progress and that you have helped carve a path for us.

And for that I thank you, President Obama.

Photo: My friend and I in Washington D.C. for President Obama’s second inauguration in 2013.