Courser-Gamrat Sexcapade Not the Issue 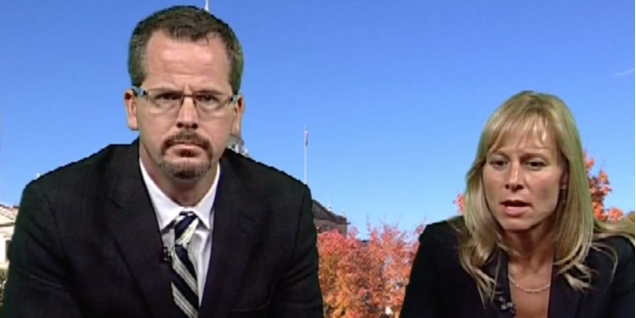 SEX! Now that I have your attention, I’d like to direct your eyes to the cover-up. Let’s get this out of the way. Yes, it is likely that Cindy Gamrat and Todd Courser had sex with each other. Yes, they both told us that marriage was between one man and one woman. Yes, they both said they believe in the sanctity of marriage. No, they didn’t tell us that they tossed their own marriage vows out the window in pursuit of carnal knowledge of a fellow Tea Party warrior. But really, that’s not the point.

It’s not about what happened under the covers; it’s about what happened in an odd attempt to cover it up. Let’s ignore the fact that Todd Courser decided the best way to deal with the fallout of his heterosexual affair was to have an email sent to Republican activists that accused Courser himself of having gay sex with a male prostitute outside of a prominent Lansing nightclub (for the record, the most unbelievable part of that email was the fact that Lansing has a “prominent” nightclub.) It’s also unclear from the email that was eventually sent whether or not Courser used taxpayer funds to pay his John – but I’ll leave that to Courser’s imagination.

But, you see, Courser’s fantasy email (a fantasy that it would solve his problem) wouldn’t be an issue if he didn’t attempt to use taxpayer-funded staff time to draft it. I can’t even imagine having any boss I ever worked for asking me to use my time to draft an email that sounded like it belonged on the dark web. And that’s the point.

As a progressive, I don’t care what goes on in Courser and Gamrat’s bedroom (or the Lansing Radison for that matter). I understand that sometimes people make choices in life they regret. I do hope that this affair leads Courser and Gamrat to rethink their position on legislating what happens in other people’s bedrooms, but I’m not going to judge Courser and Gamrat for their own personal sex lives – I’m better than that. It’s not about the sex.

Courser and Gamrat tried to cover up their relationship by asking staff to help. They allegedly used taxpayer money to do so. I have a problem with that. We should all have a problem with that. There should be a full investigation of Courser and Gamrat, they should both cooperate and resign. There should also be an investigation into who else knew about this and may have been complicit in the cover up. This isn’t about sex; this is simply a case of two people who thought that their crusade was more important than the work of the people. It’s about two people who showed a lack of respect for Michigan taxpayers by trying to get us to pay to hide their affair. Let’s focus on that.