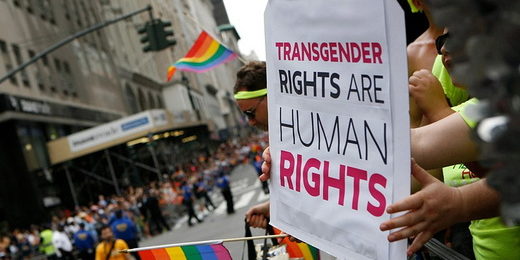 This is happening despite the fact that discrimination against transgender people is often more severe than that experienced by lesbian, gay and bisexual people. In the first four months of 2014, over 100 acts of violence against transgender people have been reported. An 8-year-old boy was beaten to death by his father, two 16-year-olds were shot to death, and an 18-year-old suffered two violent attacks by a mob and survived, to name a few.

In June of this year, three young trans women – Kandy Hall, Yaz’min Shancez, and Tiffany Edwards – were murdered for no apparent reason other than because they were transgender.

On top of that, transgender people face a range of legal issues that LGB people rarely do: sex-segregated public restrooms and other facilities, dress codes that perpetuate traditional gender norms, and barriers to accessing appropriate health care.

This is the reality of life for transgender people in our country.

2014 is becoming a year where the “T” in LGBTQ is beginning to get the national respect and admiration that has been long overdue. Transgender women like Janet Mock, Laverne Cox, Carmen Carerra, and CeCe McDonald are paving the way in the fight to end transgender discrimination by publicly telling their stories and speaking out against injustices facing the trans community.

At the same time, transgender people in Michigan and across the country can still be denied housing, jobs, and healthcare simply because of their gender identity.

If conservative legislators cared at all about making Michigan an “inclusive” state, they wouldn’t introduce a bill that denies transgender people the same protections afforded to everyone else.