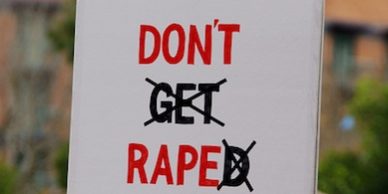 Domestic abuse was put in the spotlight recently after a video surfaced of NFL football player Ray Rice beating his wife, Janay Palmer, in an elevator. Janay’s abuse sparked national outrage (as it rightly should have), but it also ignited a whole slew of victim blaming and unfortunately even people I know participated in it, asking questions like “Why did she marry him?” and “Why didn’t she leave him?”

Like most women, I’ve been taught that if bad things like rape or assault or sexual harassment happen to me, it’s because I provoked it somehow. Whether it’s because of the clothes I’m wearing or how much alcohol I drink at a party – I’m probably just “asking for it” and if it doesn’t happen I’m “lucky.” I’ve been taught to live in a constant state of paranoia – “Never walk the streets alone at night (or do anything alone),” “You need to carry pepper spray with you wherever you go” – assuming that I could be attacked at any moment, because I’m a woman, and that I need to take all the necessary precautions to avoid it. In fact, I did buy pepper spray and took a self-defense class before I went to college, which was geared towards freshman students and comprised of only women.

I’ll be honest and tell you that even I’ve perpetuated victim blaming in the past, before I really understood the realities of violence against women. After all, it’s what I’ve been taught and is still taught in our society. It’s much easier to believe that a woman provoked an act of violence then it is to spend the time and resources holding perpetrators accountable, but it’s also wrong.

Teaching women that they are responsible for preventing (and often somehow the cause of) their own domestic violence, rape, harassment, and/or sexual assault is why those acts and victim blaming still happen, but thankfully, that’s starting to change.

After witnessing the victim blaming of Janay Palmer, one woman, Beverly Gooden, a victim of domestic violence herself, decided to change the conversation and draw awareness to the complexities of domestic abuse with the hashtag #WhyIStayed.

Many other courageous women have begun publicly fighting back against victim blaming and misconceptions about violence against women. The White House released an anti-sexual assault PSA that places responsibility for prevention on perpetrators, not victims.

It’s been 20 years since the Violence Against Women Act was passed, but thousands of women and men still experience physical abuse in their lifetime. Women are disproportionately affected – 85 percent of domestic violence victims are women.

Those numbers are frightening, but it doesn’t have to be that way.

If we’re ever going to stop domestic violence and all violence against women then we must change the way we think and speak about it – we must stop blaming victims.

If not you, then who? If not now, then when?