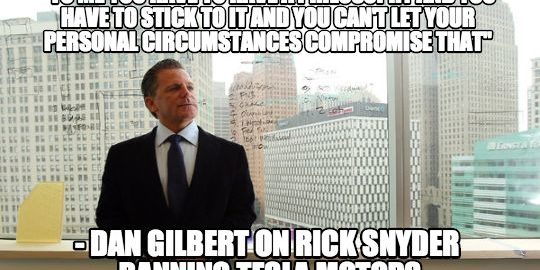 Promoting a competitive, entrepreneurial, and business friendly environment in Michigan has been the defining, if not only, image Governor Snyder had worked to portray during his time in office and it’s an image he’s counting on to get him reelected. That’s why it’s odd that the Governor signed a bill on Tuesday banning automakers from selling vehicles directly to customers in Michigan.

Through a last minute addition of language and without any debate, the bill effectively prevents Tesla Motors, a California based company that manufactures cutting edge electric vehicles, from selling their products in Michigan. Instead, it specifically requires all automakers to sell through a network of franchised dealers. But that’s not all – it also goes so far as to prohibit the opening of galleries for Tesla to display their cars and interact with potential customers.

This piece of legislation seems to run counter to the economic environment Governor Snyder claims to be working to create and is confusing to many. Even Dan Gilbert, the billionaire entrepreneur and a supporter of the Governor, criticized Snyder on his decision to sign the bill. “To me, you have to have a philosophy and you have to stick with it, and you can’t let your personal circumstances sort of compromise that,” Gilbert said. “Why do you have to go to the legislature and ban innovation?”

One has to assume the auto-dealer lobby heavily influenced the Governor’s decision.  Almost no one else supported the bill. In an open letter from the International Center for Law & Economics to New Jersey Governor Chris Christie, a state that recently passed a similar ban, more than 70 economists and law professors from around the nation argued that such action does not make any economic sense. And according to a recent Justice Department study,  “As a matter of economics, arguments for state bans on manufacturer direct sales of autos based on holdup and free-rider problems are not persuasive…”

Not only has Tesla done nothing wrong, they are an innovator in the electric car industry and are playing an invaluable role in bringing energy efficiency into the mainstream. In fact, 100 Tesla vehicles are already registered in Michigan which means folks have either driven out of state to make their purchase or have ordered them online. Impeding Tesla’s growth is wrong and so is Governor Snyder. We shouldn’t punish success. Where have I heard that one before?