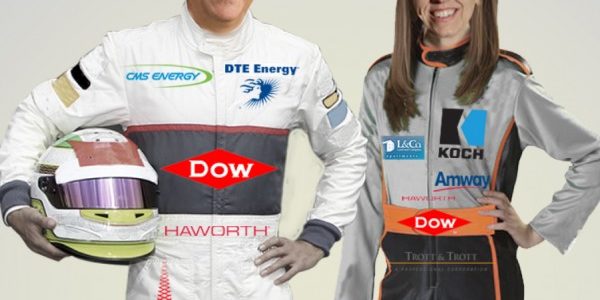 They’re both working to make sure that their wealthy friends and corporate donors are able to spend as much money as possible to buy your vote.

Terri Lynn Land kicked off the spending spree in 2004 when she was Michigan’s Secretary of State. She issued a ruling allowing those who bankroll so-called judicial “issue ads” to remain anonymous. Under that ruling, judges, plaintiffs and the public would have no way of knowing when a judge is being asked to rule on an issue involving a major donor.

Then, in 2010, the US Supreme Court ruled that corporations are people and money is speech, opening the floodgates for corporations to unfairly influence our elections by spending unlimited amounts of money. Corporations used their cash to buy Gov. Snyder and radical Republican majorities in the State House and Senate that year. Terri Lynn Land applauded the ruling saying, “I think that’s the American way…”

Governor Snyder followed in Terri Lynn Land’s footsteps in 2013 when he signed a bill doubling the maximum amount that Michigan’s wealthiest political donors could legally contribute to election campaigns, pouring gasoline on what little was left of the integrity of Michigan’s elections.

No matter that Snyder hypocritically argued for stricter campaign finance laws in 2012, that of the over 9 million people who live in Michigan, only 820 gave the maximum contribution in the 2010 gubernatorial election, that the vast majority of voters were not inhibited by campaign contribution limits in the first place, and that more money in elections removes the incentive for politicians to represent their constituents. As long as the governor’s wealthiest friends and corporate donors are happy, then who cares what the rest of us think?

In April of this year, the U.S. Supreme Court delivered another blow to democracy and removed individual limits on campaign contributions. Under this ruling, a single donor could buy the attention of every member of Congress as well as the President. This was great news for Terri Lynn Land whose wealthiest donors were previously limited to writing checks only up to $48,600, but can now give as much as $96,200 – double what most Michiganders make in a year.

The wealthiest Michiganders shouldn’t be able to drown out the voices of Michigan families by buying influence for laws that make them richer, but hurt the rest of us. The size of your wallet shouldn’t determine the impact of your voice in our democracy. But in the world of Michigan’s Millionaire Pair, money talks.