Voting Rights (get your) Act (together!) 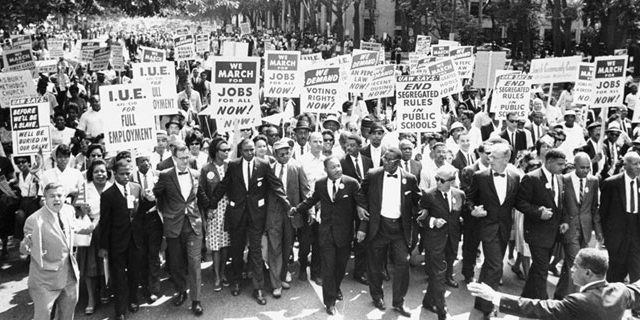 On this date in 1965 President Lyndon Johnson signed the Voting Rights Act. The Act brought an end to the era of Jim Crow laws by prohibiting discrimination on the basis of race, color, religion, sex, or national origin.

Civil and human rights activists led by Dr. Martin Luther King Jr. fought long and hard for voting rights. They were met with violence and incarceration, but it wasn’t in vain. Thanks to their dedication, everyone has the right to cast their vote and make their voice heard on election day – or at least that’s what the Voting Rights Act was designed to do.

It’s been half a century since the Voting Rights Act was signed into law, but we seem to be losing sight of the path to progress that the law forged.

Yesterday was Michigan’s primary election. As of yesterday, nearly 100 of the 110 seats in the State House have been decided. That’s because almost all of those voting districts have been gerrymandered, drawn by legislators to achieve a political result that benefits them. This is unfair and un-American, yet it’s been happening for decades in our state.

Redistricting is intended to ensure that every person’s vote counts equally, but in Michigan, that’s not how things work anymore. Legislators now choose their voters rather than the voters choosing their representatives. That is not democracy.

What’s even worse is the abysmal turnout in yesterday’s election. Wayne County, the most populated county in the state, had about 17 percent voter turnout. 17 percent. If you choose, for whatever reason, not to exercise your most fundamental right to vote on Election Day then you don’t need to worry about legislators disenfranchising you, you’re already doing it to yourself.

To top it all off, it was discovered in Dearborn Heights last week that voters were being discriminated against and unfairly denied the chance to cast ballots.

There are serious changes that need to be made in our state. Our redistricting system needs to be overhauled so that voters are choosing their representatives, not the other way around. Our elected leaders should be working to end voter discrimination and ensure that every Michigander has the opportunity to vote on Election Day. But none of that will happen unless we stand up, walk, drive, bike, take the bus, carpool, or do whatever we need to do to get to the polls and vote for leaders that will fight for us and our rights.