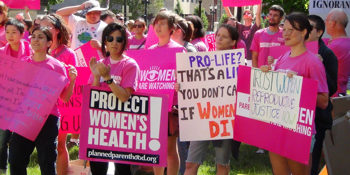 I read an opinion article this morning in the Detroit News by Nolan Finley. In it, he slams gubernatorial candidate Mark Schauer for choosing Lisa Brown as his running mate. Or at least that’s what he does on the surface. I read through this article several times and I concluded that Nolan Finley is really trying to say that strong, opinionated women are naggy and ridiculous, and that women who stand up for the freedom of other women and themselves to control their own bodies are ideological extremists. Also, he may be the first person ever to use the phrase “milking the vagina business” in a public news editorial.

You can read the full article here. But the part that I found most obscene was when he said (referring to Lisa Brown):

“Her confrontational style will give the ticket the spunk the colorless Schauer lacks, but won’t broaden his appeal. Brown could help bring in campaign cash, however. She’s still milking the vagina business, and is a minor celebrity among feminists.”

I have so many words for Nolan Finley after reading this article, so many questions.

So Mr. Finley, are women who are opposed to having old men tell them what to do with their bodies now being referred to as “the vagina business?” Or is that title just for women in general? When women “forget” (as accomplices in the war on women undoubtedly pray will happen) about conservative attacks on our freedom of choice does that mean that Lisa Brown will no longer have the ability to “milk the vagina business?” Does being a candidate who is “in the middle” mean that you don’t do everything you can to stand up for women’s rights, but just a little bit? Can voters really only be moved by a candidate who has “demonstrated executive skills” and a background in job creation, but takes no stance on moral issues? Because I’m pretty sure the last time a “moderate” of that type was elected into office, his moral stance quickly came to light in the form of anti-choice and anti-LGBT equality policies, among others.

Oh how Nolan Finley, as well as many conservatives in office, love to package everything in terms of economics and business. But what he’s forgetting here is that women aren’t just some “vagina business” to be regulated and profited off of. What he forgets is that we’re people.

So Mr. Finley, am I milking the vagina business by writing this article? Or am I just trying to inform women of the crass, ignorant terms that our gender is now being referred to as by those on the right?

Women of Michigan: If you do nothing else to involve yourself in politics this year, please VOTE. Vote because it is your most fundamental freedom. Vote because your voice matters. Vote because only 28 out of the 148 members of the Michigan Legislature are women and our collective voice is underrepresented. Vote because politicians have no right to intrude on a woman’s personal and private decisions she makes about her own body. Vote because conservative men like Nolan Finley hope that you won’t. Vote because when it comes to electing someone who will stand up for us, I can assure you that every single vote counts.