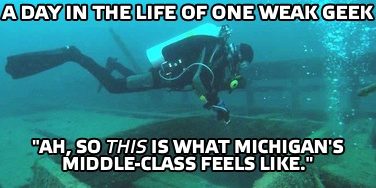 Today Governor Snyder took a dive – literally. He spent his day underwater, much like Michigan’s middle-class, touring shipwrecks as part of his efforts to promote tourism in our state. But unlike Gov. Snyder’s one-day excursion, working Michiganders have been underwater and struggling to make ends meet since he and his buddies decided that your opinion only matters if you’re a corporation.

Our unemployment rate is going up, our roads and bridges are crumbling, and Michigan seniors are paying more in taxes. Is this what he meant when he designated Michigan “the comeback state?” His office tweeted that he’d be scuba diving to “study Great Lakes history” and promote tourism. Well I have a history lesson for the Governor and it doesn’t require a tank of pressurized oxygen to learn it: trickle-down economics do not work. They never have and they never will.

You don’t even have to look that far back – in fact – Michigan’s recent history will suffice. Gov. Snyder’s plan to create “more and better jobs” and make Michigan the “Comeback State” reads like the Mackinac Center’s Christmas wish list and so far it has utterly failed. Jamming Right to Work through the legislature with zero public input or debate after insisting it was “not on my agenda.” Cutting corporate tax rates while raising them for Michigan’s middle class families. Gutting education to pay for special interest giveaways; then trying to frame that giveaway as an increase in education funding. Hijacking the Pure Michigan brand to promote Michigan as the destination for corporate suitors looking to reduce overhead by paying their workers less.

Just a few weeks ago, Snyder spewed venom at the Michigan state Senate for not voting on Medicaid expansion, proclaiming “Take a vote not a vacation.” We still don’t have Medicaid expansion in Michigan and the Governor is going scuba diving? Sounds an awful lot like a vacation to me.

The truth is the Governor talks a big game – he sold himself as The One Tough Nerd turnaround specialist – but on the issues that matter to working Michiganders, One Weak Geek has no game. He knows all the buzzwords but so far those buzzwords haven’t translated into any jobs.

Gov. Snyder bends at the whim of right-wing extremists who have no concern for the priorities of the majority of Michiganders. And the extremists are only getting more extreme, as easy money has made the threat of a primary challenge from the far-right very real.

Who knows, maybe we’ll get lucky and One Weak Geek will find the jobs he promised or his approval ratings buried deep within a shipwreck. Until then Michigan’s economy will remain “under water.”