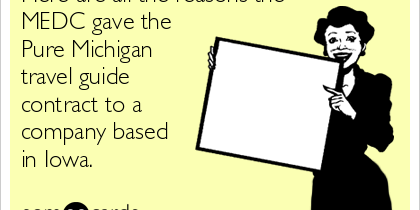 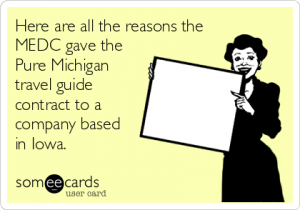 Once again, Governor Snyder and the MEDC have egg on their face.

This time, it’s following a “Pure Michigan” travel guide that was produced and printed in Iowa.

Adding insult to injury, the Snyder administration ignored two lower bids from Michigan companies and went with Iowa-based Meredith Corp. because they allegedly got the “best value for the price.”

This isn’t the first time the MEDC has screwed up, either. This winter, they were harshly criticized for putting a so-called Right to Work ad in the Wall Street Journal touting Michigan as a “better place to do business.” The catch? It comes at the expense of Michigan workers through lower wages.

Not only are Governor Synder and the staff at MEDC completely out of touch with the needs and challenges of Michigan’s middle-class families, but they clearly don’t understand what the image of Pure Michigan is meant to convey. The “Pure Michigan” brand is supposed to support tourism and bring business to Michigan by advertising our natural beauty and potential as a vacation destination. Instead, the veneer of this wildly successful ad campaign has been repeatedly tarnished by the Snyder administration.