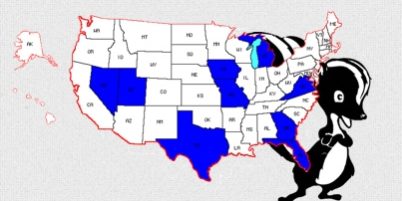 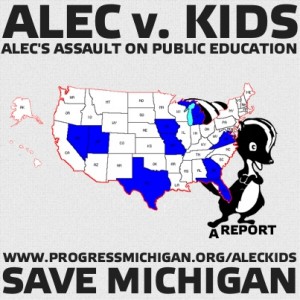 Have you heard about the American Legislative Exchange Council (ALEC)? ALEC is funded by big corporations who draft legislation, then hand it to lawmakers to introduce as their own. ALEC is the driving force behind Michigan’s recent taste for privatizing public education through voucher, charter, and cyber schools. They’ve even got a special department devoted to privatizing our education system: their Education Task Force.

2011 and 2012 saw the passage of legislation that included ALEC priorities and profits, instead of benefiting Michigan’s kids. One part of the package included a tenfold increase in the cap of how many students could enroll in virtual schools, which perform worse than traditional public schools. This is unacceptable. Sign our petition – demand that lawmakers in Lansing stop ALEC’s assault on public education!

Looking for more information on ALEC? Read our short synopsis below and check out our report at the end of this post!

What is ALEC? ALEC is a secretive “bill mill.” Its members are corporations and right-wing extremist advocacy groups, who meet behind closed doors to write laws that directly benefit their bottom line. Then they hand these “model bills” to right-wing elected officials, who pay their membership dues using our tax dollars.

How many Michigan lawmakers are ALEC members? Last year, 26 Michigan lawmakers and Snyder Administration officials were ALEC members. This year that number is down to 21, after Reps. Horn, Agema, and Gilbert were forced out of office by Michigan’s term limits law. Sen. Rick Jones announced last year he’d no longer be paying dues to keep up his ALEC membership. Former Sen. Patricia Birkholz left the Snyder Administration last year to take a post with the Michigan League of Conservation Voters.

What does that mean to states? The model legislation and policies pushed by ALEC are often advanced and enacted in states around the country with little to no alteration. Predictably, from cookie cutter bills come cookie cutter results. Our report seeks to draw lines directly from the corporations that sit on ALEC’s Education Task Force, to the bills passed that allow them to pad their profits with taxpayer dollars siphoned away from community public schools.