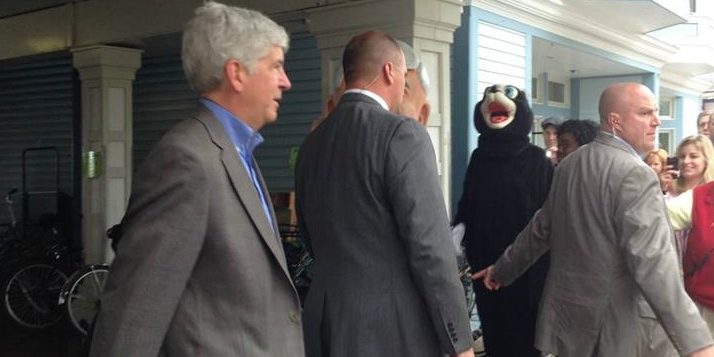 “Something stinks, and it’s time for Gov. Snyder to come clean about just how deep this goes,” said Jessica Tramontana, Communications Director with Progress Michigan. “Secret emails have showed that senior Administration officials were involved in ‘Skunk Works’ from Day One – and it’s no secret how much they dislike professional educators. Education reform should be discussed in a public forum with input from teachers, not at a ritzy weekend conference on Mackinac Island. It’s time for the governor to follow through on his campaign promises of increased transparency in state government.”

The secret Skunk Works group was meeting behind closed doors to come up with new and inventive ways to siphon public funds away from community public schools and into for-profit charter schools. Gov. Snyder has said that their ideas were “pretty cool” and continued “why don’t we make that more official.”

Unfortunately, this is far from the only example of industry insiders making recommendations to privatize public assets. These selloffs benefit corporate interests, not the citizens of Michigan.

This pattern of privatization in state services should concern anyone who cares about quality and accountability to taxpayers. Other troublesome examples of outsourcing deals, often dreamed up under clandestine circumstances, include:

Our state’s priorities should be creating jobs and maintaining quality public services. The fact is, privatization failed Michigan taxpayers the last time Lansing politicians tried to open a private prison, it was ranked as one of Michigan’s most inefficient and costly institutions. Comprehensive studies have showed other privatization experiments have failed to save taxpayers any money, and delivered worse results.

Later this week, attendees will hear from Snyder, Jeb Bush, and Michelle Rhee, on their corporate-backed agenda to attack educators and undermine community public schools.

Michelle Rhee came to national prominence when she installed a controversial high-stakes testing program in the Washington, DC schools, where she was superintendent for just three years. Recent news reports have made clear that much of the purported gains in test scores were because of rampant cheating, as often happens when high-stakes testing and merit pay programs are introduced.

Rhee’s national advocacy group “Students First” became infamous in Michigan when they passed “model legislation” on to then-House Education Committee Chair Rep. Paul Scott. Rep. Scott was recalled by the citizens of his district, despite receiving generous financial support from Students First, Gov. Snyder, and corporations like Meijer and Amway.