Something stinks about “Skunk Works” 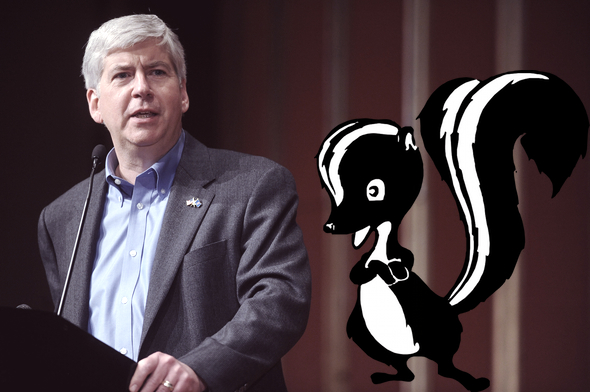 Last week, the Detroit News ran a stunning expose on the up-until-then secret meetings between Gov. Snyder’s executive office and Mackinac Center co-founder Richard McClellan. Their goal is simple: making a profit while educating our children by turning Michigan’s public education system into a voucher-like hybrid. They call their project “Skunk Works.”

The phrase “Skunk Works” is commonly used in business, and describes:

…a group within an organization given a high degree of autonomy and unhampered by bureaucracy, tasked with working on advanced or secret projects.

Setting aside for a moment the fact that “bureaucracy” in this case means undercutting nuisances like people we elected to represent our interests, “Skunk Works” is also the official alias for Lockheed Martin’s Advanced Development Programs and currently applies to one of the most expensive ($1 trillion) and over-budget projects (with grave field performance and pilot safety concerns) ever conceived by man: the F-35 Lightning II.

Does that sound familiar? Well it should, because a recent report raised these same concerns about Michigan’s expanding for-profit charter school system. In fact, most privatized government services see budgets overrun with poor results:

The true irony of the Mackinac Center’s argument in favor of privatizing government services to save taxpayers money is that it’s simply not true. In reality, their entire existence is premised on the fact that private, for-profit companies are always more efficient than government and can always deliver equal or better services at a lower price. But that’s just not true; it has never been true.

However, this hasn’t prevented Gov. Rick Snyder’s office from meeting with the Mackinac Center’s co-founder behind closed doors with the goal of turning Michigan’s education system into another failed experiment in privatization. Just yesterday, he defended it by saying:

This, from the candidate who in 2010 promised, “As Governor, I will ensure that government is open, fair and accountable to the citizens by making Michigan a national leader in transparency and ethics.”

If you ask us, something stinks about Gov. Snyder’s “Skunk Works.” Call on Gov. Snyder to release all documents related to this project – including staff time and emails exchanged during normal business hours.