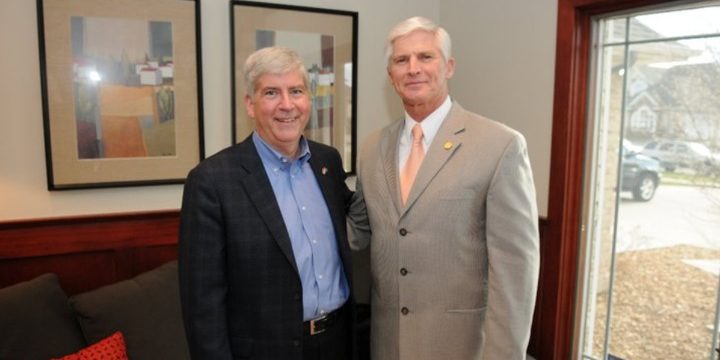 As the Dave Agema scandal reaches its eighth day, Republican leaders are still silent on whether his opinions on LGBT people are factual or appropriate for a party leader. But Republican politicians and ex-politicians can’t jump on Agema’s bandwagon fast enough, and even launched an online petition demonstrating their support.

Rep. Mike Shirkey signed the online petition in support of Agema, and posted a very long Facebook status that stopped short of endorsing Agema’s bigotry, but did claim “there is more recent scientific research supporting many of the same claims, some even more profoundly alarming.” Unfortunately, Rep. Shirkey didn’t explain which exact claims are backed up by science.

Rep. Ken Yonker, who once considered challenging Bolger for Speaker, signed the petition in support of Agema, and praised him for “bringing forward the negative struggles the gay lifestyle [sic] brings.” He also touted a website from the American College of Pediatricians, a fringe religious group that believes LGBT people can be “cured” and has been slammed by numerous doctors and scientists for preaching homophobia and junk science. The group also opposes vaccines for HPV, opposes marijuana legalization, supports corporal punishment, and supports abstinence-based sex education.

Rep. Tom Hooker signed the online petition, writing “what God calls wrong is wrong.” He  subsequently told Gongwer News Service in an interview that “I’d rather listen to the Creator than someone’s interpretation” and that it can be “true love to warn them of some of the harmful effects” of being LGBT.

The petition, which has now reached 962 signers, was also signed by former Reps. Kurt Damrow, Fulton Sheen, and Jack Hoogendyk, according to Gongwer.

What about the self-described leader of the House Republicans? Speaker Bolger put out a release last week that stopped short of condemning it, and even insisted that those who believe that LGBT people should be treated the same as everyone else were just as much in the wrong as Agema:

“There is much debate and high emotions as the U.S. Supreme Court considers cases involving the definition of marriage. As a Catholic, my faith teaches, and I believe in, the traditional definition of marriage. As a lawmaker, I am bound to honor the state constitution where Michigan voters defined marriage as between one man and one woman. As a father, I seek to teach my kids our personal faith as well as a respect for others. I do not support efforts that seek to dehumanize those who are different or have differing points of view.

“Though maybe nothing gets more emotional than the intersection of personal beliefs and politics, I urge all sides to conduct their debate with a focus on the facts and a respect for individuals. I refuse to seek to advance a political cause by demonizing people who believe differently than me. I hope others also will display respect for different and deeply held beliefs.”

Agema has said several times since last Wednesday that he is only standing up for the principles in the platform of the Republican National Committee and the Michigan Republican Party. Until even one party leader speaks out against his hatred and intolerance, it’s clear that the Republican Party endorses the message that LGBT people are choosing to live a “lifestyle,” can and should be “cured” of it, and should be warned of the “harmful effects” of being an LGBT person.