A History of Lying 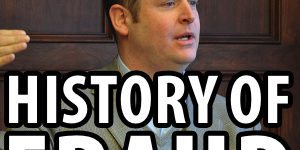 The more we find out about House Speaker Jase Bolger, the less credible he gets.

Before he attempted to defraud the voters of the 76th House District of their sacred right to a free and fair election, Speaker Bolger was busy racking up over $100,000 in unpaid taxes and being sued for defrauding a creditor.

In 1997, Bolger opened a collections agency. They received five separate liens totaling over $100,000 in unpaid taxes from three different government entities in the first few years after they were incorporated.

Then, in 2001, Wachovia Bank sued Summit Credit Services – Bolger’s business – for a breach of fiduciary duty, fraud and embezzlement. This lawsuit stated that Bolger “willfully and fraudulently misappropriated sums of money which belong to the Plaintiff.” It was settled out of court.

Jase Bolger’s well-documented propensity to lie, cheat, and steal to get what he wants is unacceptable. Check out the original court documents and tax liens, and check out the Facebook timeline we put together of Jase Bolger’s History of Fraud.

After settling with his creditors out of court and successfully escaping media scrutiny in his subsequent run for county commission, Bolger thought he’d buried it once and for all.  He’s probably hoping the same thing will happen with the grand jury investigation of his failed election fraud scheme: that people will forget.

What’s that saying? Fool me once, shame on you. Fool me twice, shame on me. It looks like Speaker Jase Bolger is trying to fool us, again. Don’t let him – help us spread the word about Jase Bolger’s decades-long pattern of dishonesty.

We’ve obtained the full response from Jase Bolger’s taxpayer-funded press flack Ari Adler to the media. We were expecting the complaint that “it was reported years ago” and actually did a search for previous media reports, but could find none. However, we did find some press releases and op-eds from a couple years back that show Jase Bolger used to have some strong opinions about embezzlers getting taxpayer funds. Those are viewable here.

As the party of no solutions and no results, the Michigan Democrats
and their hired guns at Progress Michigan can only hurl personal,
partisan attacks that have no real merit. I urge you to think
carefully about how much you, as a professional journalist, are
manipulated by the Democrats to report on news that wasn’t even news the first time it was reported years ago.

The Democrats have tried to use this information against the Speaker
in previous campaigns, but there’s nothing here that Speaker Bolger
has not spoken openly about before. As even the Democrats are forced
to admit, all of the tax issues were taken care of more than 10 years
ago.

Being the owner of a new small business facing the challenges of
government regulations and paying the bills to keep the doors open is
a struggle. Job creators like Jase Bolger are the kind of leaders we
need more of in Michigan — those who are willing to take a chance and
risk everything to build a brighter future for their families.

All taxes to the state and federal government were paid in full and
Summit Credit Services is now a successful small business providing
jobs in Michigan. As to the Wachovia suit, that issue is also more
than a decade old. It was a dispute with a bank that was resolved when the documentation the bank requested was received, showing that what was due to Wachovia had, in fact, been paid. The bank didn’t even have grounds for a penalty, let alone any judgment. You’ll note the Democrats conveniently left that fact out of their news release.

The Democrats will repeatedly lie about Jase Bolger and other
Republicans in an attempt to tear them down. This is what happens when you have no merits of your own to campaign on and must resort to making other people look bad. The problem for Democrats this election cycle is that Jase Bolger and other Republicans are successfully working to streamline government and cut taxes for all Michiganders. Some of those Michiganders might even start a small business some day and create jobs in their community. Now that’s true progress.