Janice Daniels, the recently elected Tea Party Mayor of Troy, has been making headlines and attracting national attention to Southeast Michigan recently – but not in a good way. If only this were surprising – it comes at the end of a year when Lansing Republicans have pursued an extreme social agenda while pretending to be focused on job creation. Not to be outdone, Mayor Daniels’ bigotry was recently discovered in a Facebook post she made back in June:

Troy High School students have organized a rally tonight at Troy City Hall, in conjunction with the City Council meeting there at 7:30 “to demonstrate that bigotry is not a true representation of Troy.” Mayor Daniels has since admitted that the post was in poor taste.

Hateful statements from elected officials are one thing, but now she is going further by using her radical ideology as an excuse to inflict real economic damage on the region. A transit center in Troy, which has been in planning stages for a decade, is supported by Chamber of Commerce and business groups and has already won an $8.4 million grant from the federal government, now looks to be threatened by Mayor Daniels’ detrimental policy prescriptions. She was once a vocal opponent to a library millage that passed overwhelmingly, and now opposes this project because she doesn’t want to accept the federal “debt money” that would fund it.

Mayor Daniels says the city should pay for such a proposal itself, even if it takes another decade. The argument in favor of the transit center is summed up best by Michelle Hodges, President of the Troy Chamber of Commerce: “If we miss these opportunities to compete, [Troy’s] reputation begins to diminish…we can’t afford that.”

You know the far-right has careened over the edge when business groups and working Michiganders alike are pointing out the damaging consequences of Tea Party policies in action.

P.S. – Want to get involved, but can’t make the rally? Call Mayor Daniels’ office and ask her to resign – her hateful comments and bigotry aren’t needed in Michigan. (248) 524-3500 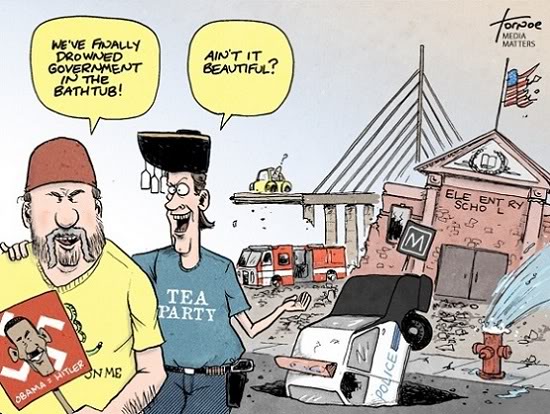