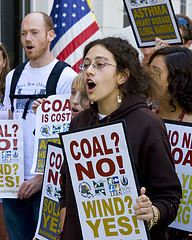 The first big policy test for Michigan’s incoming governor is shaping up to be over the future of clean energy and Rick Snyder will have very little time to decide which side he’s on in the debate between dirty coal and jobs.

Those rules include a requirement that a coal plant is actually needed before it is given a clean air permit that allows it to pollute.  By reversing the Department of Natural Resources and the Environment’s decision to deny Holland’s request for a permit, the proposed $250 million, 78-megawatt  plant may be built even though the state said it wasn’t needed.

Van Allsburg gave the state just 60 days to decide whether to issue a permit to build the coal plant or come up with a different reason for denying a permit other than the federal Clean Air Act.  Moreover, in an outrageous display of judicial activism in support of a right-wing political agenda, Van Allsburg banned state authorities from basing their decision on new federal anti-pollution rules for coal plants that were slated to go into effect on January 2 but may be delayed.

The implications of this decision go way beyond Holland and normally the Granholm administration would be expected to leap at the chance to undo the damage by filing a court appeal. But with Snyder taking over on January 1, it is unclear if that will happen.

Granholm should file an appeal, both to exit with a strong stand in favor of the clean energy jobs she championed and to ensure the case doesn’t end with the utterances of a local judge.

But Michigan’s clean energy future will ultimately be decided when Rick Snyder takes office in less than two weeks.   Will Snyder continue the state’s legal defense of its energy policies and the Clean Air Act or let an obscure local Holland judge’s decision stand?

During his campaign for governor, Snyder said he supported clean energy jobs for Michigan.  But he also told the Detroit Free Press in October that he wants to build more coal plants, and quickly.  You can’t have both.

Coal is a job killer for Michigan, that much is clear.  None of it comes from here so the money we spend on heating our homes and powering our TVs with it goes out of state.  It pollutes our air, of course, and every kilowatt of energy produced by coal is a kilowatt of energy that won’t be produced through alternatives like wind and solar.

It’s those alternatives–renewable energy–that are helping provide jobs here in Michigan.  Right now about 100,000 of them and growing.

It is not clear who Snyder is listening to on energy issues, but it is a good bet that the CEOs and corporate board room types whose bonuses, perks and gold-plated retirement benefits run into the multi-millions of dollars have his ear.  People like David Joos, the former CEO and now Chair of Consumers Energy who also leads Snyder’s favorite lobby group–Business Leaders for Michigan, which represents the state’s most influential CEOs.

Under Joos, Consumers has been a fierce advocate for coal and has ties through its board of directors to the notorious coal giant Massey Energy, responsible for the deaths of 29 coal miners in West Virginia.  But demand for energy, generally, is low in Michigan, something Consumers was forced to acknowledge when it delayed building a proposed coal plant near Bay City.  The cost of building new plants is high and ratepayers–that’s us–would be saddled with huge electric bills to pay for them.

Then there’s the issue of jobs, which Snyder ran and won on.  Michigan just recently won its first big wind turbine assembly plant, and small businesses doing clean energy work have grown to the point where about 60 of them have organized themselves as Michigan Businesses for Clean Energy.

That growth isn’t inevitable, however.   What is inevitable is that someone is going to design, engineer, build, assemble, deliver, sell and maintain all of the manufacturing process, marketing and transporting of wind and solar units.    Someone is going to be getting those jobs.

Snyder’s choice is really simple.  Will it be Michigan’s workers and businesses or someone else’s?