Being Caffeine Free May Save My Roommate… 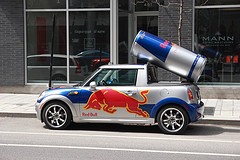 Image by Uncle Paul the Birdman: back injury “again” via Flickr

About two weeks ago I decided it was time to go caffeine
free.  Now, some of you may be thinking, “Why
the heck would you do that?” while others will remind me that, in moderation,
caffeine is not a bad thing.  I agree.  However, if you know me, you know I sometimes
have a hard time doing things in moderation.
Take soccer for example,  I
started playing a year ago, after one season I thought it was a good idea to
play on four different teams, run as much as I could, and play as hard as I could
– hence a broken collar bone.  So, you
get my point, I have trouble with moderation.
Which leads me to the reason I am posting this blog: in excess – caffeine
kills.

No – seriously… listen. An email, sent to me by my new
roommate reading, “Good you’re going off the caffeine,” struck my attention. Soon
after opening it I learned that caffeine does in fact kill, at least that is
what one Kentucky man is claiming.  I
highly suggest you read the story my roommate sent me from MSNBC entitled Kentucky man to plead
caffeine insanity in wife’s death.

The man claims he drank too much caffeine from diet pills,
energy drinks, and soft drinks and it caused him to go insane and kill his
wife.  Hey, I don’t know the science
behind that claim, but I don’t think my roommate wants me to test it.

So, now, when I crave the 9 a.m. cup of coffee or the 3 p.m.
cola or the 10 p.m. Jack and Coke, I will easily remember that water, juice,
and Guinness are indeed the better choices.
Also, excuse me if you call Progress Michigan and I am a little bit
grumpy over the next month or so.