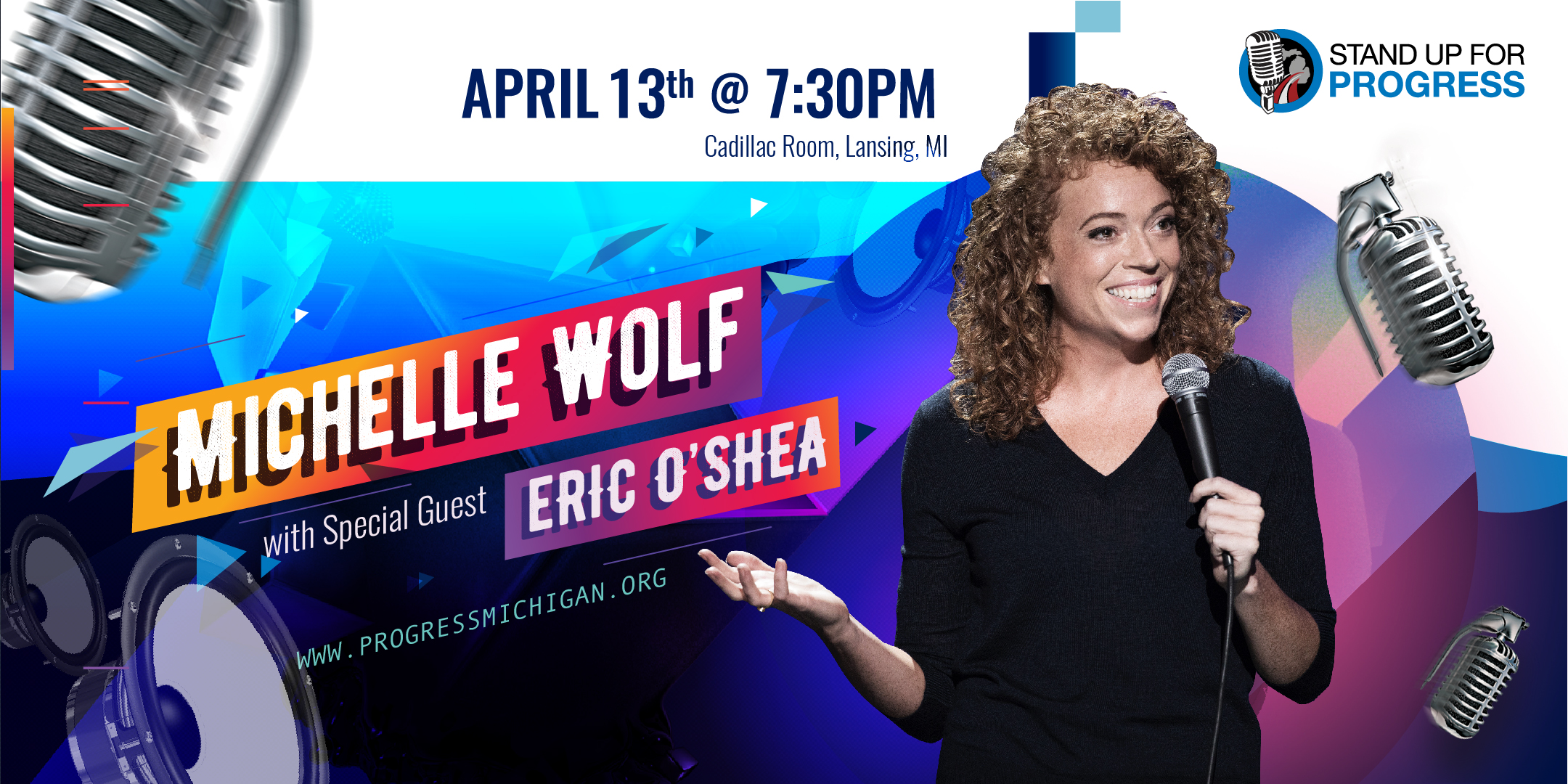 Please join us for Progress Michigan’s Stand Up for Progress with headliner Michelle Wolf and special guest Eric O’Shea!

If you are interested in the Premium Ticket at $100 (includes priority seating and 2 drink tickets), please click here.

We expect this show to sell out, and we look forward to seeing you all there!

*While this event promises to be hilarious, some of the content may not be appropriate for younger audiences.

MICHELLE WOLF has quickly become one of the most influential voices in the comedy landscape as she continues on the path of a breakout year, with the Village Voice calling her “the voice comedy needs right now” and The Daily Beast declaring, “Michelle Wolf is the future of stand-up comedy.” She recently served as the executive producer, writer, and host of the critically-acclaimed variety sketch series “The Break with Michelle Wolf” on Netflix. Previously, she made international headlines as the much buzzed-about headliner of the 2018 White House Correspondents Dinner.

Wolf debuted her first hour-long stand-up special, “Michelle Wolf: Nice Lady”, on HBO late last year. The well-reviewed special tackled a wide range of topics from her surprising thoughts on feminism, the environment and why Hilary Clinton could not be a “nice lady,” and more of life’s everyday absurdities. She received a Primetime Emmy nomination for Outstanding Writing For A Variety Special.

Wolf was previously as an on-air contributor and writer for Comedy Central’s “The Daily Show with Trevor Noah.” Prior to joining “The Daily Show,” she was a writing supervisor and performer on “Late Night with Seth Meyers,” where she also made her late-night television debut in July 2014. She appeared frequently on the show in various bits and as the popular recurring character she created, “Grown-Up Annie.”

Additionally, Wolf created and starred in two digital series, “Now Hiring” and “Used People” for Comedy Central and was a writer on the “88th Academy Awards” hosted by Chris Rock. She was named to Vulture’s “50 Comedians You Should Know in 2015” and was one of “The Top 10 Funniest Women in NYC” by Time Out New York. She was also named to Rolling Stone’s list of the 25 funniest people on Twitter right now (@michelleisawolf) and selected as one of the “New Faces of Comedy” for the 2014 Just For Laughs Festival in Montreal.

Wolf headlines comedy clubs and colleges all over the country and has performed at a number of festivals including Outside Lands, Moontower, Bonnaroo, Just For Laughs Montreal, JFL 42 and the Dublin Comedy Festival. In 2016 she completed an incredibly successful first appearance at the Edinburgh Fringe Festival with a sold out run of her debut hour-long stand-up show “Michelle Wolf: So Brave.” The critically acclaimed show, which earned her a nomination for the Best Newcomer Prize from the Edinburgh Comedy Awards, garnered numerous four-star reviews from top publications such as the Guardian, Herald and Scotsman.

When not crisscrossing the nation on tour, Wolf lives in New York. She is an avid long-distance runner in her limited free time.