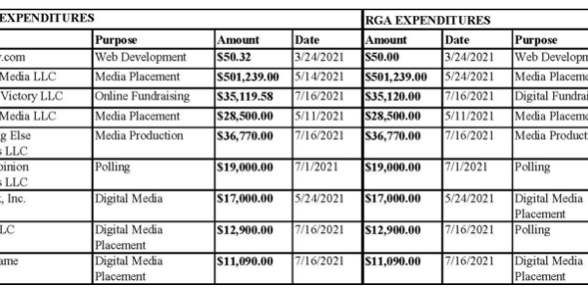 MICHIGAN – Today, Progress Michigan filed a complaint alleging several serious Michigan Campaign Finance Act violations against Tudor Dixon’s campaign, the Republican Governors Association (RGA) and the Get Michigan Working Again (GMWA) Super PAC. According to the complaint, GMWA is acting as a front for the RGA, hiding from the public the fact that the RGA is actually behind millions of dollars in spending on Dixon’s behalf. The RGA has reported to the IRS that it, not GMWA, has been spending money propping up Dixon’s campaign while falsely telling the public in Michigan that GMWA is responsible for all that spending when it is not.

“As outlined in the complaint, desperation to save a floundering campaign has led to potential violations of campaign finance law and potential illegal coordination,” said Lonnie Scott, executive director of Progress Michigan. “This shady shell game between the Republican Governors Association and Get Michigan Working Again Super PAC is not only a major violation of Michigan campaign finance law, but also implicates Tudor Dixon and her campaign which may have been illegally coordinating campaign activities. Michigan’s campaign finance laws are weak enough as it is without outside groups abusing the system.”

According to the complaint, “GMWA has reported spending hundreds of thousands of dollars on independent expenditures [for ads] in the gubernatorial election on its…campaign finance reports. However, RGA has reported to the IRS that it – RGA – actually made those expenditures, not GMWA.”

In short, the RGA is paying for the ads, not GMWA, but it was GMWA that had its disclaimer on the ads, a clear violation of Michigan campaign finance law because the RGA’s disclaimer should’ve been on those ads.

“It’s our hope that a thorough investigation is launched and all parties involved stop misleading Michigan voters,” Scott continued. “Given the dysfunction of Trump’s Republican Party I understand the RGA’s desire to hide their identity through a much nicer sounding name, but doing so at the expense of the full public disclosure required by the campaign finance laws must have consequences.”

A full copy of the complaint, including records showing the identical expenditures and payments between RGA and GMWA can be found here.