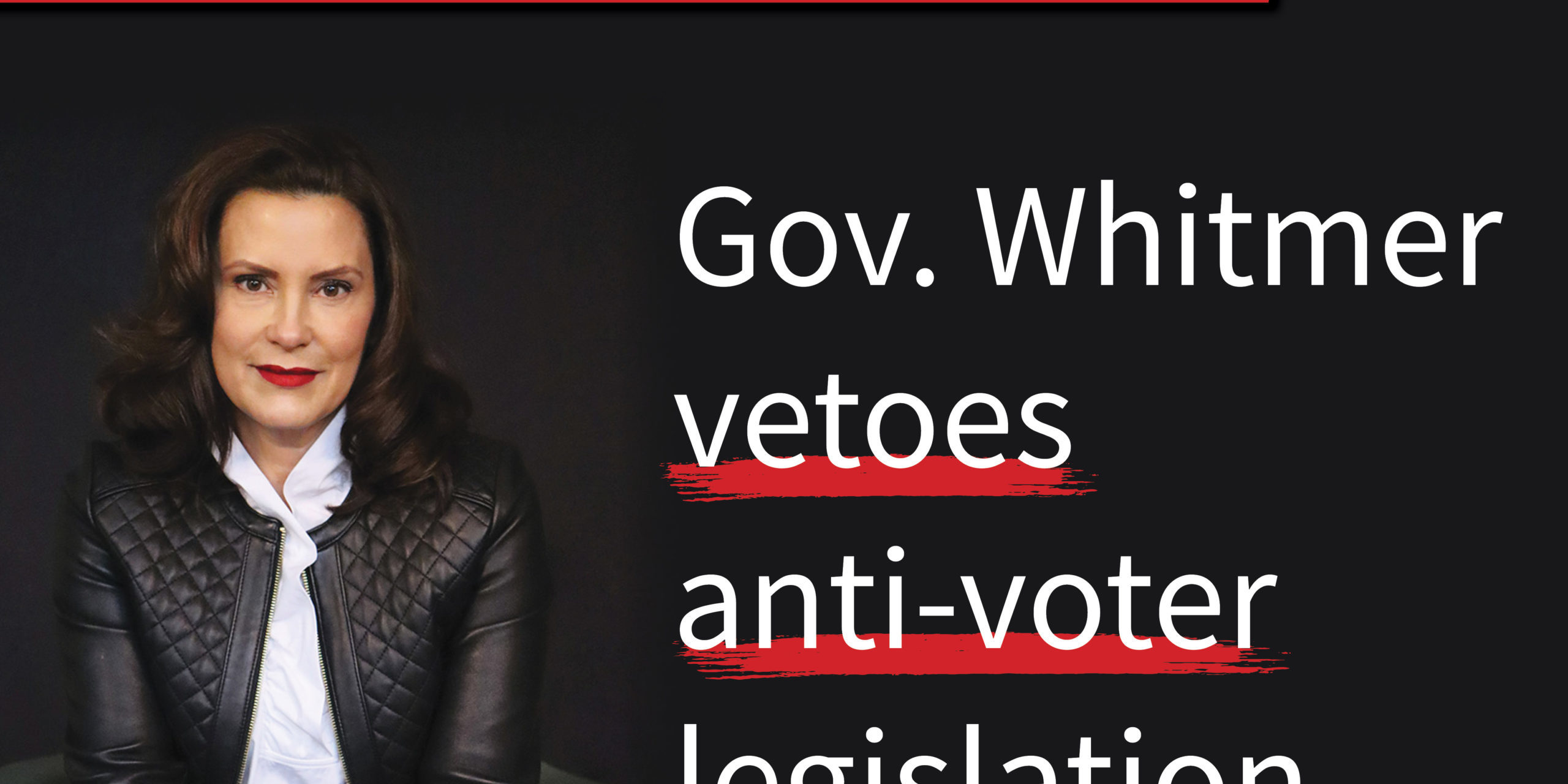 LANSING – A number of organizations issued statements today applauding Gov. Gretchen Whitmer for protecting voting rights and the will of Michigan voters after she vetoed Senate Bills 303 and 304 – which would put up deliberate barriers between voters and the ballot box and restrict resources for clerks.

Not only do these bills jeopardize the freedom to vote for Michigan voters, they also attempt to perpetuate the Big Lie and match the policy of the so-called Secure MI Vote ballot initiative.

“This proposed anti-voter legislation is intended to gut the progress Michiganders have made to modernize our election system which is now the most secure and accessible it’s ever been,” said Merissa Kovach, policy strategist for the ACLU of Michigan. “We applaud Governor Whitmer for vetoing this voter suppression attempt, and protecting the voices and votes of historically disenfranchised Michiganders who would face more barriers to the ballot if this legislation were to become law. Protecting the right to vote is paramount, and these bills do the opposite.”

“We thank Governor Whitmer for vetoing these deeply harmful, anti-voter bills. They were deliberately designed to erect unnecessary barriers to voting, and threatened to disenfranchise thousands, disproportionately harming BIPOC and other voters,” said Carolyn Normandin, regional director of ADL Michigan. “Governor Whitmer’s veto sends a vital message affirming the freedom to vote for all Michigan voters. Along with our partners, we will continue fighting to ensure that every Michigander – regardless of race, gender, religion, or zip code – can have a voice in the future of our state.”

“Many of our senior members view the right to vote as a sacred expression of freedom and duty regardless of our political party. The rights of Michigan senior voters need to be respected and their voices heard to preserve the integrity of our democracy,” said Dick Long, president of the Michigan Alliance for Retired Americans. “Imposing more ID requirements for in-person and absentee voting will make it harder on senior voters trying to participate in our democratic process and cast their ballots. We applaud Governor Whitmer for vetoing this harmful legislation.”

“All baseless and extremely harmful anti-voter efforts, such as SB 303 and SB 304, deserve to be firmly rejected,” said Aghogho Edevbie, state director for All Voting is Local Michigan. “Our lawmakers should be focused on improving our elections and protecting the freedom to vote, instead of pandering to baseless claims and conspiracy theories by making it unnecessarily difficult for voters to access their rights.”

“Despite today’s victory, there has been collateral damage in the process. The false and baseless accusations about our election process have fueled a newfound sense of distrust of our government and a loss of faith in our democracy.  Anti-voter efforts like this will do nothing but distract and divide us from addressing the real challenges our communities face,” said Quentin Turner, Michigan program director for Common Cause.“We will continue to fight for every Michiganders’ freedom to vote — regardless of zip code, political party, race, or ethnicity. We are grateful that with Governor Whitmer’s veto of these two anti-voter bills, we can proudly say to America that in Michigan, we support every eligible voter’s freedom to vote.”

“Interfaith Action, as part of its faith framework, believes in the dignity, inclusion and full participation of all individuals in social, economic and political sectors,” said Rev. Dr. Sid Mohn, director of Interfaith Action of Southwest Michigan. “As such we oppose any efforts to suppress voting and support efforts that provide for full and fair participation in elections and thank Gov. Whitmer for vetoing this harmful legislation.”

“These dangerous anti-voter bills seek to take away voting options from Michigan voters, block critical funding for our local clerks, and restrict our freedom to vote,” said Lisa Wozniak, executive director for the Michigan League of Conservation Voters.“In 2018, Michiganders voted overwhelmingly to expand access to the ballot and make voting more accessible. Voting should be less complicated, not more restrictive. This legislation would take us backwards. We commend Governor Whitmer for vetoing this misguided legislation and helping protect our freedom to vote.”

“Shame on the Conservative-led legislature for putting forward these bills aimed at voter suppression,” said Kermit Williams, executive director of Oakland Forward. “These disastrous anti-voter bills would create barriers for Black and brown folks, poor people, rural voters and seniors, so Gov. Whitmer deserves praise for rightfully vetoing them. It’s now time to work together to expand access to the ballot box so everyone can have a fair say in deciding representation in their communities. We need to make voting easier, not harder.”

“People First Economy believes the democratic process of our elections is paramount to good governance and allowing the people to have their voices heard,” said Hanna Schulze, president of People First Economy. “Our communities and people cannot thrive, nor can our businesses succeed, if the future of our democracy is cloudy. Our elections are the cornerstone to allowing our people to have their voices heard in their elected representation, which is why we support the governor’s veto of bills that would make it harder to vote.”

“Gov. Whitmer continues to be a champion for voting rights and protecting Michiganders’ freedom to vote, and we thank her for vetoing bills that would guarantee more barriers to the ballot box,” said Lonnie Scott, executive director of Progress Michigan.“Now, we hope the legislature will spend their time more wisely, focusing on common sense reforms like expanding early voting options and more resources for clerks.”

“Every voter, in every state, deserves the freedom to vote without threats of intimidation or unnecessary barriers,” said Carmen Lopez, senior democracy director for the State Innovation Exchange (SiX) and SiX Action. “We will continue to support the legislators and elected leaders in Michigan and elsewhere who are standing strong against these anti-voter measures.”

“The Michigan Unitarian Universalist Social Justice Network is a statewide social justice network representing 24 UU churches. It is committed to protecting democracy as a principle of our faith,” said Randy Block, director of the Michigan Unitarian Universalist Social Justice Network. “We thank Governor Whitmer for, again, for vetoing legislation that would make it more difficult to vote in Michigan. All voices must be heard in our elections!”