Betsy Devos is No Friend to the LGBT Community 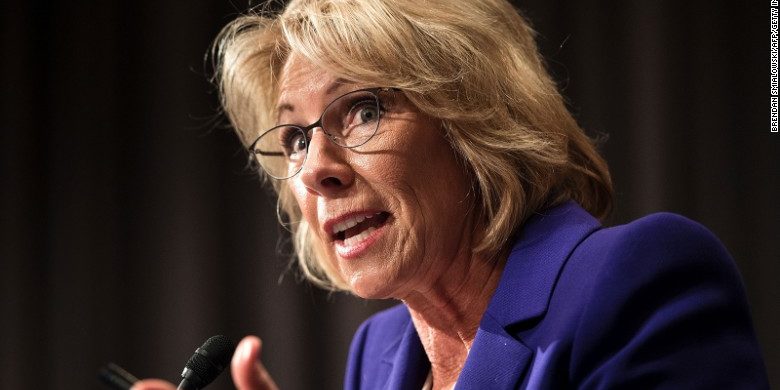 There’s a story making the rounds about how Donald Trump’s upcoming plan to rescind protections for transgender students in schools involved pushing Betsy DeVos out of the way. According to reports, DeVos was opposed to the move.

The New York Times reported, “Ms. DeVos, faced with the choice of resigning or defying the president, has agreed to go along.”

One might be led to believe by this account that somehow Betsy DeVos is an LGBT ally — but nothing could be further from the truth. (Also, if she were an ally (which, again, she is not), what kind of ally folds in the face of pressure and compromises their values (which she doesn’t have)?)

You’re not an ally if you’re a mega donor to Michigan Republicans. And make no mistake, the DeVos family and the Michigan Republican Party are one and the same. If the DeVos family wanted to make it illegal to not wear neon green shoes on Tuesdays, you can be damn sure that there would be a legion of right-wing elected officials who would jump to their call and try to get a law on the books.

The same goes with basic protections for LGBT rights and protections. If the DeVos clan wanted to advance human rights, they would’ve made it happen.

Instead, it’s been the opposite in the Great Lakes State with Michigan Republicans hard at work over the years to attack the LGBT community and stymie progress.

DeVos-backed executive-level officials like Bill Schuette fought against the very school protections now being rolled back by Trump.

Schuette and Gov. Rick Snyder spent plenty of time in the courts trying to hold back marriage equality.

The Republican-controlled legislature, which is flush with members who have pockets full of DeVos cash, rammed through a bill package that was signed by Snyder into law that allows discrimination in adoptions.

And Republicans wanted to carve out special protections for those who wanted to use religion to justify discriminatory treatment of the LGBT community.

DeVos never once spoke out against these actions even though she had years to do so — because she was bankrolling the people who were doing it and was not opposed to it. And as mentioned above, if discrimination against the LGBT community weren’t up to the DeVos family’s tastes, they would’ve put an end to it.

Betsy DeVos is no friend of the LGBT community. And this latest example shows that in the face of pressure within the administration where she now enjoys a newfound level of power, she’s no champion for the LGBT community — she’s just another cog in Donald Trump’s hate machine.

A real leader who truly values the lives of the LGBT community and supports their fight for equality and justice would not compromise their values so quickly. But then again, DeVos is no leader.