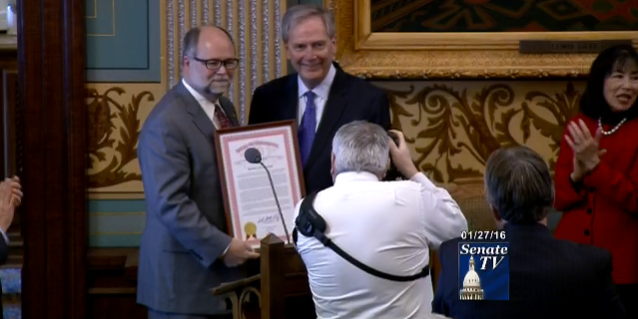 The Flint Water Crisis is a man-made tragedy that has dominated local, national and international news coverage. People in Flint, all across Michigan, the United States and other countries are paying attention. Sadly, it seems that the only place where the crisis isn’t a big deal is the Michigan State Senate.

As a matter of fact, rather than holding hearings to get to the bottom of what Rick Snyder knew and when he knew it, Senate leaders stopped all business and invited Snyder’s former Chief of Staff Dennis Muchmore to the Senate floor to give him an award for his work. You didn’t read that wrong: Senator Arlan Meekhof decided that giving the man who was the top staffer involved in the Flint Water Crisis an award was more important than fixing the problems in Flint.

Those who read Rick Snyder’s emails about Flint know that one of the causes of the crisis was the arrogance of Dennis Muchmore, who reacted by worrying about blame and politics, while leaving others to worry about Flint’s children.

By honoring Dennis Muchmore and slapping a medal on one of the people who failed Flint before doing anything to help the people of Flint, Senate Republicans have shown that their priorities are completely out of touch with Michiganders who need real leaders to solve this problem.