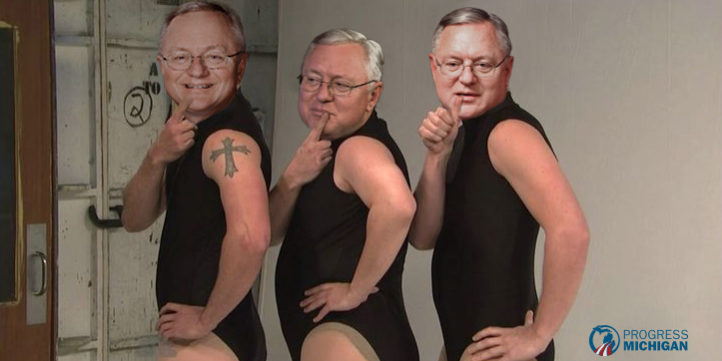 Senator Rick Jones appropriated the words of Queen Bey last week when he proposed taking away health insurance benefits for couples that live together but aren’t married. Currently, the law says that unmarried people are allowed to apply for state benefits just like married couples are, as long as they live together.

Sen. Jones was quoted in MLive saying: “If you are a state employee with a girlfriend or boyfriend and you want them to get state benefits, then make a commitment and get married. If you want it, put a ring on it.”

First of all, domestic partnership benefits was not what Beyoncé had in mind when she produced Single Ladies. The song is an anthem of empowerment for women – whether they’re single, divorced, married, or anything in between. The song lyrics are about leaving the crappy guy you’re with for a better one, they demand respect, and they celebrate being single. The song is certainly not an indictment of being single, advocating that people should get married if they want to have access to basic benefits like health care, like Sen. Jones apparently perceives it to be.

Secondly, Sen. Jones’s proposal, as with many decisions being made by our elected officials both statewide and nationally, does not take into account that “family” reflects a different reality than it did in 1950. The word “family” doesn’t automatically mean a husband, wife, and kids anymore.

While yes, the Supreme Court ruled that same-sex couples have the right to get married and that is a great accomplishment in the quest for equal rights for LGBTQ people, it doesn’t mean that everyone wants to get married. What Sen. Jones is effectively saying is that couples that live together but aren’t married aren’t as serious or committed as couples that are married, and therefore don’t deserve to have access to things like healthcare.

Unmarried people shouldn’t be disrespected and treated differently just because they decided not to put a ring on it. As I’ve said before, we need to detach a person’s value from their marriage choices and embrace the dignity and value of a wider range of family structures.