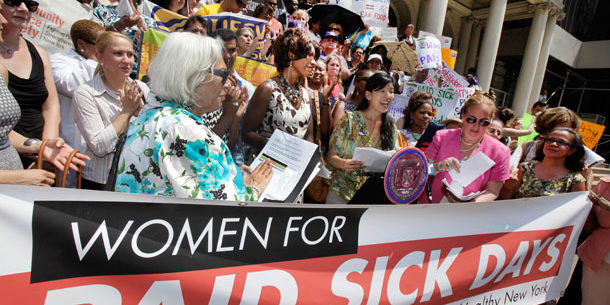 Barely two weeks after a coalition of social justice groups announced their campaign to advocate for workers’ access to earned sick leave in Michigan, the Mackinac Center for Public Policy is already running scared. Since the announcement, the right-wing think tank has published no fewer than four separate blog posts attacking the campaign, three of them on the same day.

Which begs the question: why is the Mackinac Center so worried by the prospect of workers no longer being forced to choose between their health and paying the bills?

The blogs themselves are reactionary boilerplate, complete with vintage Red Scare clichés about how sick leave activists are not truly grassroots. Yet even this hysterical overreaction is telling in its own way.

The Mackinac Center bills itself as a research-driven policy shop committed to “improving the quality of life for all Michigan citizens.” But there can be no denying that their union-busting, school-defunding policy recommendations favor Michigan’s one percent at the expense of everyone else – particularly workers and people of color.

Despite its pretense of neutrality, the Mackinac Center is a weapon of the ruling class. It exists solely to give the naked greed of corporate executives a veneer of intellectual respectability. And their attempt to stop earned sick leave policies from moving forward is a case in point.

Those most hurt by the status quo are low-wage workers. Nationally, 80 percent cannot take a paid sick day when they fall ill. And, as low-wage workers, the consequences of being shorted a day’s pay are far more dire than they are for higher-paid workers, who are better positioned to absorb the loss without missing crucial rent and utilities payments.

With a recent poll showing that 86 percent of Michiganders support earned sick leave, they’ve got their work cut out for them.