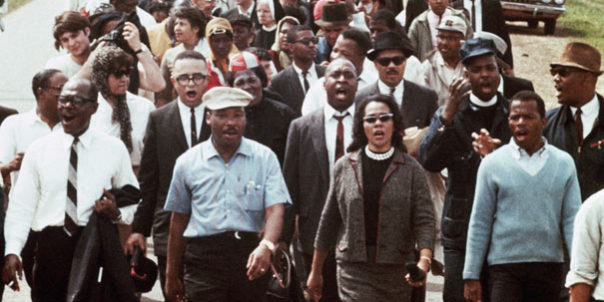 Over the holiday, I went to see a screening of the new film Selma. It focuses on the period between the Selma to Montgomery civil rights marches and the passage of the Voting Rights Act of 1965. I found it both historically relevant and emotionally impactful in its effort to give life to a period of time and piece of legislation that are among the most important in our nation’s history. A history that’s still being written as we continue to fight for people’s right to vote.

One of my favorite aspects of the film is its effort to highlight the instrumental role of the numerous women in the civil rights movement, including Diane Nash and Amelia Boynton Robinson. Coretta Scott King, the wife of Dr. Martin Luther King, Jr., was also presented in such a way. It only seems fitting that as the role of women in history is lifted, the film’s director, Ava DuVernay, has become the first African American woman to be nominated for a Golden Globe for best director.

However, what struck me most and what weighed on my mind throughout the film was the fate of the Voting Rights Act.

In June 2013, the Supreme Court voted to slash a key section of the act effectively eliminating the decades-old requirement that states and localities with a history of voter discrimination receive approval from the federal government before changing voting procedures. The purpose of this requirement was to ensure any changes didn’t have a discriminatory purpose or effect. What’s ironic is that there was already a provision in the Voting Rights Act that enabled states to be exempt from this rule if they maintained a clean record for 10 years.

Although voter discrimination is much less of an outright problem than in 1965 (evidence the legislation has been effective) it has not been eliminated. In fact, the same day the Supreme Court released its decision the Texas Attorney General announced that new redistricting maps, which were previously rejected by a federal court after it was found they discriminated against non-white voters, would immediately go into effect.

Here’s a list of what the other states’ legislators, once required to gain approval for voting changes, have done to take away voters’ rights since the ruling.

Whether it’s voter ID laws, gerrymandering, or early voting and absentee ballot restrictions that make it harder for people to vote, the fact is that the problem of voter discrimination is far from over. If recent history has taught us anything, it’s that we’re not living in a post-racial society and although great progress has been made, great progress we must make still. In order to be successful in that endeavor we must recognize and face our challenges, not deny their existence.