Blood is Thicker than Michiganders 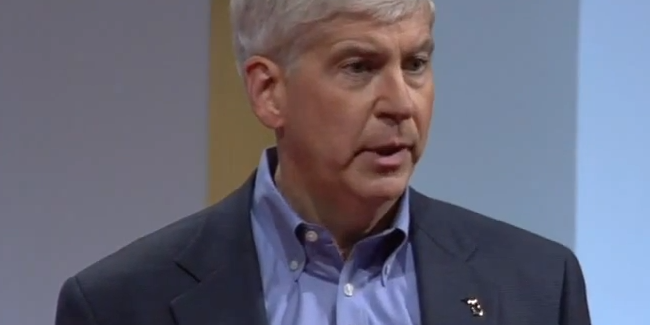 They say that blood is thicker than water. An example of this saying was on display at Wayne State University during Sunday’s debate between Mark Schauer and Gov. Rick Snyder.

I’ve spent a lot of time watching Rick Snyder interact with Michiganders. In most cases, he conducts himself as a disinterested bystander waiting for the “numbers” or the courts to make his decisions. He doesn’t wear his emotions on his sleeve or do a good job at showing empathy towards others (as evidenced by his odd statement after residents in Metro Detroit faced historic floods.) But on Sunday, I saw a side of Rick Snyder I’ve never witnessed before.

During the debate, Mark Schauer pointed out that, under Rick Snyder, a contract that benefitted the governor’s cousin, George Snyder, was more than doubled from $19 million per year to $41 million per year. For the first time since he emerged on the scene with his Super Bowl ad, Rick Snyder showed emotion and he was angry, indignant, hopping mad.

First, he claimed that bringing up a legitimate issue was, “dragging a good man through the mud.” Then, he went a step further and said, “last time it was renewed was before I became governor.”

Let’s be clear, reports show that the George Snyder did indeed reach out to Rich Baird, the Governor’s right-hand-man, after the State Senate attempted to cut the contract to $1 million per year and the contract was restored and eventually more than doubled.

So the governor misspoke (or lied) about the furniture contract that benefitted his cousin. But that’s not what struck me as odd about his outburst. For the last few years, many people have faced policies that have negatively affected their lives. Seniors’ pensions were taxed by Gov. Snyder, yet we haven’t seen one statement of empathy toward those on fixed incomes being squeezed. People that were laid-off lost six weeks of unemployment insurance, yet not once has Gov. Snyder defended them. Women were forced to purchase “rape insurance” and Gov. Snyder didn’t bat an eye. Time and time again, Michiganders have faced adversity and time and time again, Rick Snyder has stood by like a helpless bystander unable and unwilling to defend them.

Later in the debate, the governor was given a chance to show the same passion towards others as she showed when defending his cousin. The governor was asked to take a position on marriage equality and instead of offering the same type of full-throated, fist clenching defense of equal rights, Snyder hedged and said he would wait for the court. That’s not leadership.

In the end, defending a contract that monetarily benefitted his cousin while not defending Michigan workers or equal rights speaks volumes about Rick Snyder’s leadership abilities, his integrity and his out-of-touch priorities.