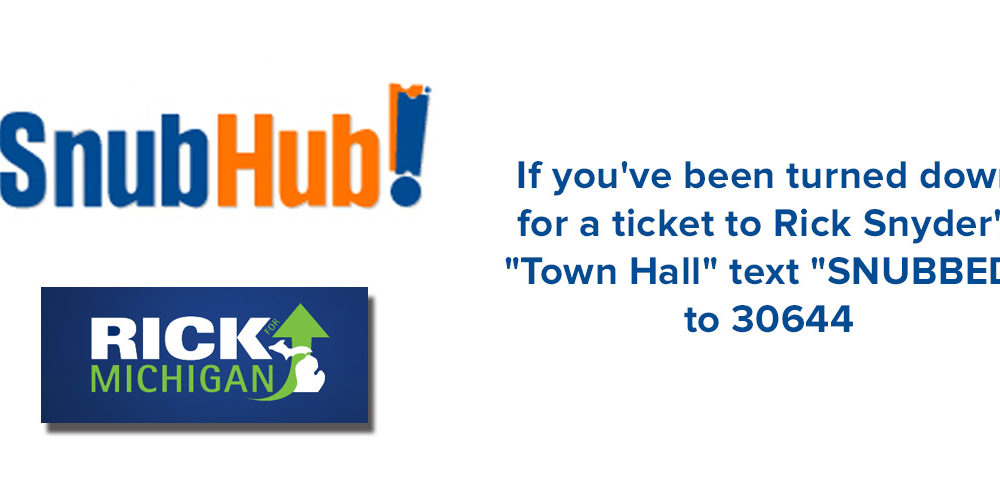 Last night, Lonnie Scott, Progress Michigan’s executive director, and I discovered that the free tickets we applied for to attend Governor Snyder’s first town hall in Kalamazoo were cancelled.

We took to the Tweetosphere to notify the public and demand answers as to why we, taxpaying residents of Michigan and Governor Snyder’s constituents, were denied access to his public town hall.

Our questions were met with a response from Emily Benavides, a Snyder campaign spokesperson who tweeted:

.@LonnieScott, these town halls are for undecided voters. Are you undecided? If so, @MarkSchauer‘s base problem is worse than we thought

FYI: A town hall is “…open to everybody in a town community and…attendees generally may voice their opinions and ask questions of the public figures, elected officials, or political candidates at the town hall.”

If the Snyder campaign is handpicking attendees then that’s a rally, not a town hall. Are they turning away registered Republicans, Gov. Snyder’s neighbors, and anyone registered with any other political party as well? Emily Benavides “said she wasn’t sure.”

Like Lonnie said, “If the Snyder campaign is only allowing in undecided voters, then I should be considered ‘undecided. I can’t decide whether Gov. Snyder is totally corrupt or completely incompetent.”

We might not agree with what the governor says (or more often doesn’t say) or does, but we still deserve a chance to get answers to questions we have about his decisions that affect us. Governor Snyder might think of himself as a “CEO” but at the end of the day, he is a public servant voted in to office by us. When he isn’t serving and doing what’s best for the public, we deserve to know why and he should be held accountable.