For Anti-Choice Conservatives, the Moment of Truth Has Arrived 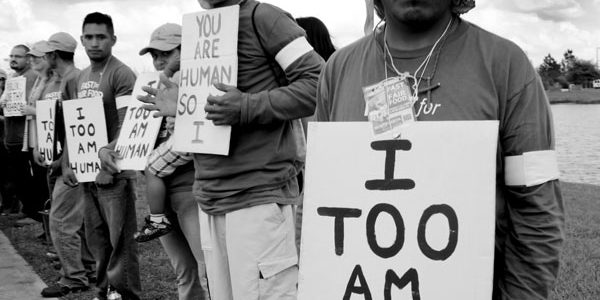 My phone rang yesterday. I answered and on the other end was my Republican uncle. “I’ve got a pretty loaded political question for you,” he said without any of the usual talk about family. I prepared myself for a question about unions, or President Obama or maybe even a historical question about why progressives didn’t do enough to rally around Teddy Roosevelt’s 1912 Bull Moose Party. You know, the usual family conversations.

Then he said this, “Explain to me why a bunch of conservatives, who constantly talk about the sanctity of life and the need to protect children, are blocking buses and screaming at the nearly 300,000 needy children that God has placed on their doorstep.”

For those of you who haven’t been paying attention, there are thousands of children from Central America who are fleeing violence in their home countries and are coming to America seeking refuge. In response, conservative activists have protested by blocking buses transporting these children while waving disparaging signs and chanting hate-filled slogans.

As a nation we have faced similar situations before and our history is proof that we do not always rise to the occasion. In 1939, a German ocean liner carrying Jewish refugees was denied entry into the United States and eventually was forced to return to Europe. It is estimated that nearly one-quarter of the refugees later died in concentration camps. In 1961, the Freedom Riders faced the same type of hatred, and violence in some cases, as their buses traveled the country promoting integration. Today’s protestors stand on the same moral low-ground that the intolerant protestors stood on in the past.

Let’s be clear, there are many people of faith that see this for the humanitarian crisis that it is. But too many conservatives have used this as another excuse to play partisan politics instead of coming together to fix the problem.

The Bible tells the Parable of the Two Sons (Matthew 21:28–32). The meaning of the parable is that God values actions over words. Could this be a test for anti-choice extremists as my uncle suggests? One priest believes it is a test that many Christians are failing.

I too think it is a test for conservatives. Their words express concern for the well being of vulnerable children, but their actions do not fit their rhetoric. Instead of compassion, we’ve seen more hatred from the right. They do this under the banner of their own self-defined liberty, but they seem to forget the words etched on our own Statue of Liberty:

“Give me your tired, your poor, your huddled masses yearning to breathe free.”

That’s the story of how my uncle and I agreed on a political issue. But, is this really a political issue? Has our politics finally crossed the threshold where innocent children are used to score political points? Sadly, conservatives seem to have taken us to that threshold.