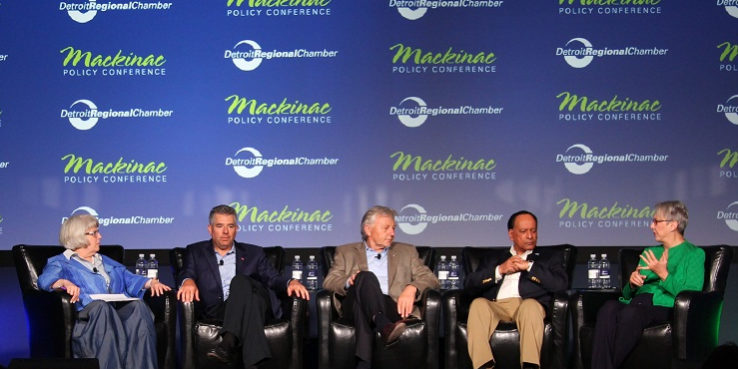 Each year on Mackinac Island, hopeful candidates from around Michigan audition at the Lawmaker Scouting Combine before a veritable Who’s Who of business lobbyists, donors and reporters. Colloquially known as the Mackinac Policy Conference, the Combine lasts for three days, tickets can cost up to $2,575, and is pretty much mandatory for anyone on the political career-track. Candidates who say the right things can land a few well-heeled corporate sponsors by improving their draft stock. And according to AT&T president Jim Murrary, the “right things” are whatever the business community wants:

“It is going to happen,” Murray said. “This is an issue that needed to bubble up from the business community for legislators to want to take it up. It would not happen without us telling them what we need. I have great confidence that this is going to be on their radar screen for the fall.”

Also, attendees are usually drunk. What could possibly could go wrong?

For Terri Lynn Land, lots — and not the ones that sit empty after her family-owned company forced 170 families to vacate. No, Land initially refused to answer a few questions from a scrum of reporters — a hallmark of the Combine and near certain grounds for disqualification. Taking her career into consideration, Land decided to sidestep two questions and fail another. And these weren’t even esoteric questions; talking-points would have done just fine.

Would she have supported the auto-bailout? No answer. Asked if she supported Net Neutrality earlier in the day, Land’s answer led to this follow-up gem courtesy of MIRSNews:

“I think the Internet should be free,” Land said. “It is a great source of information. It’s the opportunity for people to talk. I’m a Twitter fan. I’m on Twitter. And it’s a great way to connect with people. So I think that’s a very important part of this, and especially in emerging countries and growing communities it’s a way to actually communicate and I think it’s very important to have that available for everyone.”

During a press scrum after the event she was asked to clarify.

Reporter: When you said that you think the Internet should be free are you talking about broadband infrastructure free access nationwide?

Subsequent “clarifying the clarifying remarks” press releases were issued by Terri Lynn Land’s campaign, presumably by fax. Asked if she considered NSA whistleblower Edward Snowden to be a patriot or traitor, Land responded with the intellectual rigor of a sixth-grader who hasn’t read the source material:

“I think we have to go through the process and if he breaks the rules, he has to pay the price,” Land said multiple times.

Pay the price, indeed. Millions of dollars have already been spent on Terri Lynn Land’s campaign, and for all that investment Land can’t answer a single question. Meanwhile, Michiganders are left wondering whether they should laugh or cry — or both. James Madison captured this sentiment perfectly in The Federalist Papers:

“A popular Government without popular information, or the means of acquiring it, is but a Prologue to a Farce or a Tragedy, or perhaps both. Knowledge will forever govern ignorance: And a people who mean to be their own Governors, must arm themselves with the power which knowledge gives.”