Score one for the home team 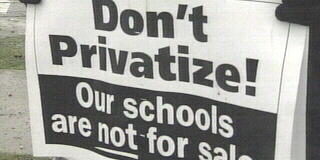 It was recently announced that the Muskegon Heights school district would buck the trend of seeking a for-profit management company and instead operate under self-management.

The move is a victory for local residents who wanted to see more local control for the struggling district. In late May, a group of concerned citizens sent a “Citizens RFP” to the district calling for the district to move away from for-profit management and return to local control.

“It’s an independent school district,” board President Arthur Scott said following Monday’s board meeting. “We don’t have a vendor to worry about.”

While the district is still under emergency management, the move is a step in the right direction. The district also shot down a proposal from the Education Achievement Authority, which has been under intense scrutiny as a failed education experiment riddled with mismanagement and a chancellor who jumped ship.

The Muskegon Heights school system has suffered from dwindling student population and low academic performance due to disinvestment in the surrounding community. A national for-profit corporation, called Mosaica, had run the district, but that group pulled out when they realized that educating underserved communities isn’t the most profitable business – nor should it be.

Under the Snyder administration, we’ve seen a questionable strategy of taking academically and financially struggling districts and turning them over to unaccountable emergency managers and for-profit companies. And we can’t forget that Gov. Snyder cut $1 billion from neighborhood schools while giving corporations a $1.8 billion tax giveaway, resulting in 48 school districts operating in a deficit.

Hopefully, Muskegon Heights is on its way toward healing and growth. We cannot allow our children’s educations to be avenues for corporate profit nor can we allow parents and the community to have no voice in how their neighborhood school is operated.