Conservative Lawmakers Must Apologize to Female Constituents for Sexist Comment

Conservative Lawmakers Must Apologize to Female Constituents for Sexist Comment

LANSING — Today, conservative lawmakers Peter Pettalia, Roger Victory and Ben Glardon made light of women’s issues and their female constituents while on the House floor by posing for a photo with fashion magazines, all while Rep. Pettalia claimed: “Don’t say we don’t understand women.”

“A group of anti-choice Republican men pose with fashion magazines and claim they understand women?” questioned Rep. Vicki Barnett, D-Farmington Hills. “On the Democratic side we women work hard and do our jobs everyday to fight for issues that are of dire importance to women – we find this to be insulting, especially considering the fact that all three of those male lawmakers voted to pass the rape insurance law in Michigan. These legislators need to apologize to their female colleagues and constituents.”

All three lawmakers voted in support of the controversial “rape insurance” legislation and their sexist posturing has no place on the House floor.

“I am sure the representatives will say that their actions were just a joke taken out of context,” said Lonnie Scott, executive director of Progress Michigan. “Issues like access to women’s health care and equal pay for equal work are not a joke, but to these legislators that doesn’t appear to be the case. These representatives should immediately apologize for their sexist behavior.” 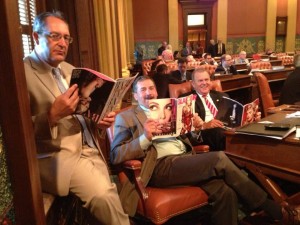