A Penny Earned is a Penny Spent 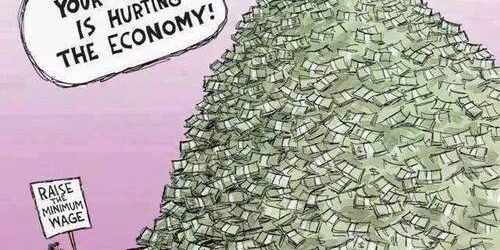 The idea that raising the wage of the country’s lowest paid workers will result in massive layoffs has always been a laughable concept that the far-right loves to push on the minimum wage debate.

“If we raise the minimum wage the sky will fall,” they say.

Raising the minimum wage to $10.10 on a national level would actually create about 85,000 new jobs and result in an economic boost of $22 billion, according to a recent report.

What do you know? When you pay people a decent wage, they actually spend that money. What a thought. The Raise Michigan Coalition, which is trying to raise Michigan’s minimum wage to $10.10, has been harping on that concept for the past year and it’s time that everyone started listening.

Raising the minimum wage to $10.10 would put more money in workers’ pockets, which they would spend locally on things like food, gas and clothes. You won’t see minimum wage workers stashing away money — they can’t afford it.

Not only would raising the minimum wage help create jobs and give a boost to our economy, it would also save taxpayer dollars in every single state. In Michigan alone, over $205 million would be saved and help over 100,000 families get off of food assistance.