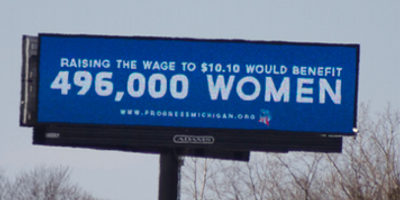 I had dinner with my mom the other week after going and seeing a movie together. During our mother-son chat, we got talking about my work on the Raise Michigan Coalition campaign to raise Michigan’s minimum wage to $10.10 for ALL low-wage workers.

My mom, who is a social worker, asked me what the current minimum wage was for tipped employees.

“So it’s hardly changed from when I was a server,” she said with disappointment.

That was roughly three decades ago when she worked for the minimum wage.

Oh, how the minimum wage has changed — and not changed — since then. And it hasn’t been for the better.

The value of the minimum wage peaked in 1968, but since then, it has steadily declined. Over the past four decades, the minimum wage has decreased by 20 percent and will decrease another 15 percent by 2022 if it’s not indexed to inflation.

My mom didn’t have a family to feed when she was working on the minimum wage. If she had, she may have been able to stay above the poverty line. In 1968, a single mother could raise her children on the minimum wage without being in poverty.

Through my work with the Raise Michigan Coalition, I have heard working moms speak to the challenges of raising a family on the minimum wage. As a matter of fact, a majority of low-wage workers are women — many of whom have children to feed and care for.