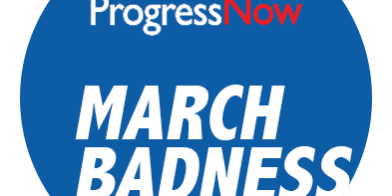 They’re really, really bad. Who’s bad? Sixteen of the most radical right-wingers in America are competing for the crown in our second annual March Badness tournament – and they’re bad for America. But who’s the worst? We need your help deciding.

Each year during March Madness, Progress Michigan – and our sister organizations around America – enter our submission for the craziest right-winger in our state. This year, we submitted the ever-present and ever-offensive Dave Agema for his tireless efforts codifying bigotry in Republican Party bylaws and a nearly endless stream of offensive comments aimed at LGBT individuals and Muslims. Agema is going up against Texas’s Greg Abbott and we need your help moving Agema onto the next round.

Matchups are decided by who gets the most votes on social media each round; and each time you LIKE, Tweet, or +1 Dave Agema that counts as a vote. After this round, contestants will be cut down to the Crazy Eight and if you have any idea who Dave Agema is, you know he belongs there. Will you LIKE, Tweet or +1 Dave Agema and let America know who the baddest, craziest right-winger of them all is?