Snyder’s Tricks (for Working Families) and Treats (for the Wealthy, Corporate CEOs and the Far-Right)

Snyder’s Tricks (for Working Families) and Treats (for the Wealthy, Corporate CEOs and the Far-Right)

LANSING — For the past three years, Governor Rick Snyder’s right-wing agenda has resulted in some seriously spooky results for Michigan’s middle-class and working families. While Snyder was busy handing out goodies to his corporate buddies who’ve come knocking at his door, he’s slammed opportunities shut for everyday Michiganders. 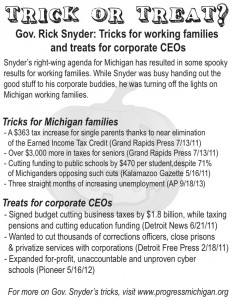 “Snyder came into office wearing his businessman costume, but it was all one big trick. Over the last three years, Michiganders have come to realize who Snyder really is — just another right-wing politician with the wrong priorities for working families,” said Lonnie Scott, executive director of Progress Michigan. “Michiganders need to double-check what Snyder is handing out. When you take off the pretty wrapper that Snyder’s cloaked his administration in, you’ll quickly realize the people of Michigan have been duped.”

In light of Halloween, here are just a few of the numerous examples of Snyder’s “tricks” for working families and “treats” for his well-connected allies, corporate pals and Michigan’s wealthiest people.

-Thanks to Snyder, seniors now pay over $3,000 more in taxes – causing the most vulnerable citizens to choose between paying for groceries and filling prescriptions (Grand Rapids Press 7/13/11)

-Snyder slashed higher education funding by 15 percent — making it harder for young Michiganders to get ahead without accruing massive amounts of debt (Detroit News 6/21/11, Associated Press, 6/22/11)

-Snyder cut funding to public schools by $470 per student – despite 71 percent of Michiganders opposing such cuts — resulting in larger class sizes and less resources in the classroom (Grand Rapids Press 5/20/11, Kalamazoo Gazette 5/16/11)

-After voters overturned the emergency financial manager law, Snyder went against the will of the people and created a new one (Associated Press 12/27/12)

TREATS for right-wing special interests, corporations and the wealthy:

-Snyder’s $1.8 billion tax break for big business was paid for by cuts to schools, as well as higher taxes on the elderly and working families (Detroit News 6/21/11, Associated Press 6/22/11)

-Snyder privatized the care of Michigan’s military veterans, leading to a laundry list of complaints about the services (Lansing State Journal 10/4/2013)

“Time after time, Snyder is tricking the public, while doling out treats to those who need help the least,” added Scott. “He claims his policies have sweetened things up here in Michigan, but the reality is much more bitter. Snyder is obviously delusional if he thinks Michigan is the ‘Comeback State’ while we’re experiencing three straight months of increasing unemployment. This claim isn’t only disingenuous, it’s also a reflection of how Snyder’s right-wing policies have left Michigan without the more and better jobs he continuously promises.”