The childish standoff over the government shutdown is dead. But the extremists and irrational crazies in the Tea Party are very much alive and well.

The Senate voted 81-18, and the House voted 285-144 to reopen the federal government and prevent countless Americans and our country from careening off of the fiscal cliff. However, following a bipartisan solution has resulted in a very partisan threat looming in the not so distant future. Tea Party members are vowing to launch primaries against Republicans who voted to end this nonsensical standoff and avoid an economic catastrophe. 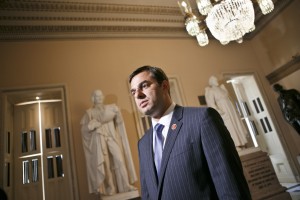 It’s pretty obvious by now that Tea Partiers don’t care if they thrust the United States economy into a disastrous  collapse following a government shutdown or default on the country’s debt.  We can only imagine what this would have done to the national economic recovery and Michigan’s climbing unemployment rate.

We wanted to break down the Michigan vote, and flush out the lawmakers who voted in the best interest of all Americans by stopping this nonsense, instead of catering to the whims of a few.

Props to Representatives Upton, Camp and Benishek who put on their thinking caps and did what was necessary to avoid a debt default, and continuing to stymie the national economy.

Shame on Representatives Bentivolio, Miller, Huizenga, Amash and Walberg. They voted against a bipartisan deal, and cast a vote to let the U.S. default on it’s loans and threaten our economic future. Their message is pretty clear: “We don’t care.”

Outraged? We are, too. Feel free to contact them and let them know what you think.

Governor Rick Snyder and the Michigan Republican Party constantly site Michigan as an example of how to run the government. This is ironic, considering Snyder has governed in some of the most divisive times in our state including, Right to Work, Vaginagate, Bolgergate and more.

No wonder One Weak Geek thinks he’s got it made. The Republican party controls the House, Senate, the Supreme Court, Secretary of State and Attorney General’s office. It might be smooth sailing passing laws that carve out benefits for Snyder’s special interests, however it’s anything but for middle class Michigan families.

Even though Snyder has absolute autonomy over every facet of government in the state of Michigan, he still lacks the chutzpah to whip his party into shape and enable a vote for Medicaid expansion in Michigan. When he finally pieced together the votes to pass the bill, he was still unable to pull off immediate effect on expanding health care to low income Michigan families. The failure to get immediate effect on this bill will cost Michigan residents more than $630 million dollars, or $7 million every day.

Lawmakers across the spectrum certainly have their work cut out for them earning back the trust of the American people following the government shutdown, and it doesn’t seem to us that the state of Michigan and its controversial or volatile partisanship should be the place to start.