Yesterday, at the Southwest Michigan Innovation Center in Kalamazoo, Gov. Rick Snyder said, “You can’t be an entrepreneur and innovator and be fully rational.” 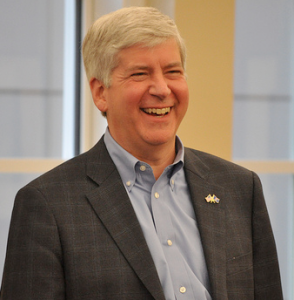 Apparently, Snyder has applied that principal to his tenure in office.

There’s nothing rational about pushing for the unlimited expansion of cyber schools, while the research shows that these for-profit institutions have shown no evidence of effectiveness.

There’s nothing rational about saying a policy like Right to Work is “very divisive” and not on an agenda and then passing it at the drop of a hat.

There’s nothing rational about the leader of a political party having absolutely no sway over his GOP colleagues. Medicaid expansion was passed without immediate effect — even while being at the top of Snyder’s priorities list — costing Michigan millions of dollars in federal funding and delaying health care coverage for hundreds of thousands of needy Michiganders.

And there’s nothing rational about a $1.8 billion dollar tax cut for big business being paid for by Michigan’s middle class and less funding for our local schools.

As the great inventor Thomas Edison once said, “What you are will show in what you do.”

And what Snyder has done over the last three years has shown the people of Michigan who he really is. He’s not “One Tough Nerd” or “One Successful Nerd” as he likes to portray himself.

Snyder is a highly-partisan, right-wing politician, who has a penchant for big business tax cuts that are paid for by working Michiganders, school children and the elderly.

Whether it’s LGBT equality, accountability to the public or a demonstration of leadership — Snyder has failed Michigan.