Immunity in the Emergency Room 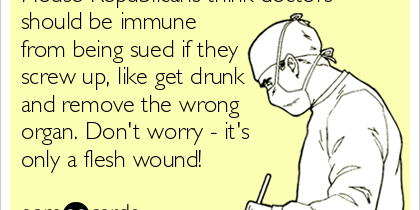 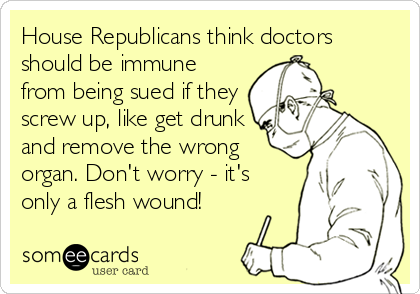 Committees are also where some bills go to die — and that’s exactly what we hope happens to HB 4354 in the House Judiciary Committee on Thursday.

House Bill 4354 would provide immunity from lawsuits for E.R. doctors even in instances of negligence and misconduct that injures patients.

The fallout from this bill would be unprecedented. There would be no legal recourse for recovery if a doctor screws up in an emergency room. And we’re not just talking about about the “Lil’ Jimmy needs four stitches” emergency room. We’re talking about obstetrical units, surgical operating rooms, cardiac catheterization labs and radiology departments.

Quite simply, almost nothing a doctor screws up would be eligible grounds for patients to sue.  Even in the dramatic instance of a surgeon removing the wrong body part, the doctor would not be held responsible. If the doc administers potentially lethal drugs to the wrong patient, they can still get off scot free. Even if the doctor is drunk on the job, they would still be off the hook from being sued.

According to the Rand Institute, over 80% of unplanned hospital visits are admitted through the emergency room. Every one of these cases would be covered by this immunity provision.

Medical malpractice filings are down 80% in the last 30 years, and proponents of HB 4354 will tell you this is about lowering healthcare costs. This type of legislation would protect nobody other than the doctors who foul up and the companies who insure them.

While this bill protects bad doctors, there is one group that is left without one iota of security, and that’s Michigan families.