Ron Weiser needs to go back to school, but not as a regent 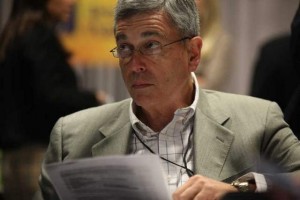 Ron Weiser, former chairman of the Michigan Republican Party and a key player in making Michigan a Right to Work state, wants to go back to school. On Sept. 3, on the conservative talk show “Patriot Voices Radio,” Weiser announced that he would be running for the University of Michigan Board of Regents in 2014.

Weiser had some interesting — yet highly off-base — things to say about the Board of Regents. Remember, this is a group of people that Weiser envisions himself working with after the 2014 elections. His comments are not only incorrect and highly politicized, they don’t exactly mesh well if you’re planning on working with this group in a year or so. After one of the hosts calls the Board of Regents “socialists,” Weiser one-ups him by going even further down the political spectrum, saying the board tends to lead toward “communism.”

10:32 – …by winning both of those seats and we can block what these, as you pointed out socialists, but I think you’re being nice, in some cases I think that communism might be the right word with some of the things that they’ve been doing. And one of them that I think is the most important is to prevent our universities from finding ways around Right to Work.

It’s time that Weiser got a lesson in political theory. If Weiser actually knew what real communism and socialism looked like and advocated for, he would know that his claims are way off base. Does Weiser think Mark Bernstein and Shauna Ryder Diggs are advocating for the abolition of private property? I wonder if Weiser and Laurence Deitch have spoken over coffee about the liberation of the proletariat from the bourgeoisie. Probably not. Let’s be honest, while the University of Michigan Board of Regents may be on the liberal side of the spectrum, to call them communists or even socialists is a low-level scare tactic from the intolerant and backward days of McCarthyism.

Along with educating America’s future workforce, Weiser wants the University of Michigan to be a place where students are inundated with conservative rhetoric.

14:00 – Especially at U of M, we have to work tirelessly to pass on the value of freedom and conservative values to these kids because the professors there, as you know, seem to control the agenda…I’m afraid that these young kids are — they may not be getting brainwashed — but they’re not being exposed to the other side and understanding the value of freedom and conservative values. I want to make sure they at least have that opportunity on campus to hear others. We worked hard and I worked with the regents to get our majority leader Cantor to the campus and of course he was treated rudely as they always do. But at least the six or seven hundred kids there got a chance to hear about conservative values and we have to do a lot more than that. We gotta bring a lot of people to campus and make sure they’re not just listening to the socialist side, so they get to listen to the conservative side too.

Weiser believes teaching students about “freedom” — aka an unregulated free market and fewer taxes — and “conservative values” — aka restricting women’s health care and the Second Amendment — should be the responsibility of the university. Weiser made it pretty clear that he wants the U of M campus to be a proving ground for conservative messaging and ideals — not a place of higher education where students are able to better themselves and ultimately their community. It’s the job of the Board of Regents to run the university, not make sure conservatives are getting their messaging out.

It looks like Weiser needs to go back to school, but not as a regent. He needs a few lessons in political theory and the responsibilities of the Board of Regents.