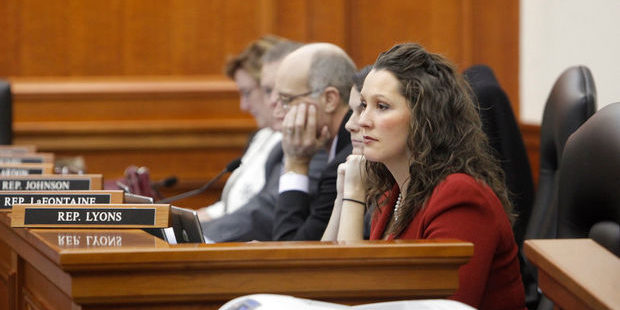 Last week, we issued a statement calling on Rep. Lyons to end her outright hypocrisy and support Michigan’s public education system. One day later, Lyons was on The Tony Conley Show talking about the proposed color-coded school ranking system, but spent most of her time responding to our release by marginalizing Progress Michigan and our over 100,000 supporters (like you).

Lyons: Well, first, I would never [highlight]consider a wing of one certain party[/highlight], particularly in this case the Democrat party, [highlight]a citizens’ watchdog group[/highlight]. They are a wing of a political party and that’s all they are. [highlight]It’s very clear to me that they oppose me[/highlight], but what they don’t say is do they support transparency and letting parents know how our school districts are doing or do they support the status quo?

First, we are not a wing of any party and receive a grand total of $0 from the Democratic or Republican parties. Second, we are a citizens’ watchdog group. And finally, we do not oppose Rep. Lisa Lyons per se – we oppose her policies – because they put Michigan’s public education system and the future of our state at risk.

After cutting $1 billion from local schools to pay for an annual $1.8 billion corporate tax giveaway, far-right lawmakers decided to add a few hundred million dollars to the education budget as political insurance. Now, Rep. Lisa Lyons can claim that they’ve actually increased the education budget, but in reality, they’ve only put a Band-Aid on a gushing wound that they’ve created.

Apparently, Tea Party lawmakers invest in their priorities by disinvesting in them. The right-wing has opened the door for corporations to profit off of Michigan’s kids by selling them a lackluster education. Last year, Michigan’s largest for-profit charter school company, K12 Inc., reported $700 million in revenue while providing an inferior product. The on-time graduation rate for K12 Inc. schools is 49.1%, compared to 79.4% for all students in states in which K12 Inc. operates.

But to answer your question Representative Lyons, we do support transparency. And parents should know that the chair of the House Education Committee, Representative Lisa Posthumus Lyons, thinks large corporate tax cuts are more important than providing a quality – and free – public education for our children. Furthermore, Lyons wants Michigan’s children to be educated by for-profit charter school companies that perform worse than their public school counterparts. Finally, here’s a brief history of Rep. Lyons’ hypocrisy:

[dropcap]1.[/dropcap] Rep. Lyons last made national news in December for proposing an amendment that would have exempted her husband, who works as a corrections officer, from the  “right-to-work” law. She did so while declaring on the House floor that “all people should have the freedom to decide for themselves whether or not to join a (labor) organization,” which of course is a freedom already protected by federal law.

[dropcap]2.[/dropcap] As Chair of the House Education Committee and daughter of failed GOP gubernatorial candidate and Snyder advisor Dick Posthumus, Lyons has been an important ally  of Snyder’seducation agenda, which is to voucherize Michigan’s public schools and undermine local school districts with a statewide school takeover district.

This year, Lyons reintroduced legislation that would expand Gov. Snyder’s Education Achievement Authority, a statewide district that would be able to take over local schools and remove elected community schools boards. The bill, HB 4369, includes a clause that exempts public schools from an EAA takeover if they meet a list of criteria, which is– specifically designed so that Grand Rapids schools in Lyons’ district comply.

[dropcap]3.[/dropcap] Attempting to justify legislation that would make it easier to dissolve public schools, Rep. Lyons argued, “Pigs get fat. Hogs get slaughtered.” As an elected official (currently enjoying her annual months-long paid summer vacation), Rep. Lisa Lyons is literally feeding at the government trough. While the per capita income in Michigan is $25,482, Rep. Lisa Lyons makes $71,685 – almost three times as much as the average Michigander. You could say she’s hogging it.