Jase Bolger and the Failure of Bridge Magazine 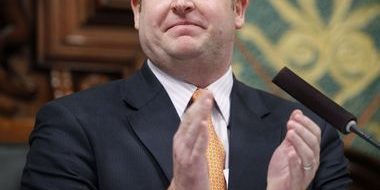 If you were reading Bridge Magazine yesterday, the online-only news and analysis site from The Center for Michigan, you may have been shocked to see, not analysis of Detroit’s bankruptcy or any of the issues pending before the state legislature, but an apology to Speaker Jase Bolger.

In June, Center for Michigan’s Chairman Phil Power had asked Bolger to write a column in Bridge “addressing the public perception that politicians do not take on tough problems.” He did so, and they also asked House Minority Leader Tim Greimel to submit a column to run alongside that – but they didn’t tell Bolger about that last part.

Bolger didn’t like that very much, and wrote a nearly unbelievably whiny email:

Bridge took what I crafted from our conversation that sought to offer explanation to the public that their state government is not shying from tough decisions, is willing to do things even when unpopular, and is looking out for the long term and made it into a ‘there they go again, partisan bickering again and nothing has changed’ fight… Through presentation they made the point completely opposite of our conversation and my column. I feel completely used.  I am angry that you would seek a column from me that would then be use to generate a fight.  I’m left to assume that was done to drive “clicks” because a fight ‘sells’ better than a discussion of ideas.

Got that? He feels “completely used” and “angry” that they asked him to write a column, which they immediately printed when he submitted it.

Now, if any of us common plebes wrote an email like this to any other newspaper editor, it would be deleted without a second thought, or maybe tacked up to the bulletin board for them to re-read whenever they were having a bad day. But Bridge, committed as they are “to help Michigan citizens develop an agenda to move our state forward,” felt the House Speaker deserved an apology column – 764 words apologizing to Bolger because he felt “completely used.”

Pretty weak, don’t you think? We did too, especially considering conservative groups love to screech about how Bridge is apparently considered a “liberal” voice in Lansing.

I guess we should lower our expectations. After all, Phil Power is the same guy who recently wrote that Michigan’s government is failing its citizens, and went on to suggest that because of this, public institutions should no longer have any role in our society.

With “liberals” like these, who even needs Speaker Bolger?