Save Michel Mendy from Legalized Bigotry 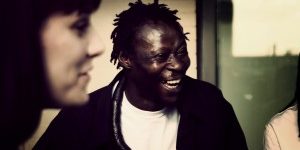 The voice of the people might be the only thing standing between a young artist from West Africa and arrest and violence. Michel Mendel is gay and from Senegal, where it is illegal to be gay and where the U.S. State Department has noted widespread violence against LGBT people.

Recently, a group of drummers and dancers joined Michel’s adopted mom, Leslie Matthews and a couple dozen of Michel’s friends and concerned community members to try to halt his deportation back Senegal. His freedom and safety will be at serious risk if he is sent back.  When the news conference/protest took place, Michel’s hearing was scheduled for any day.  So, though the drumming and dancing were festive, the event’s message was serious: Save Michel Mendy, Stop the Deportation.

It all took place outside the Immigration and Customs Enforcement (ICE) Office on Mt. Elliot in Detroit.  People spoke to Michel’s character and cultural contributions to Michigan.  But they also told the bizarre story of how Michel’s being shot combined with a bureaucratic snafu led to his very life being endangered.

Michel was shot by a robber in 2010.  The police ended up turning him over to immigration instead of pursuing the assailants. Officials told him he would not be in trouble as long as immigration officials could visit him regularly to make sure he was living where he said he lived.  Officials did visit him regularly at one of the addresses he gave them.  But, somewhere in the rigmarole of dealing with the legal system after being shot, Michel had put his home address on one form and his lawyer’s address on the other.  Since he was never at the lawyer’s address, officials noted him as being in violation of their orders and, therefore, subject to deportation.

Despite Michel’s obvious compliance, and many people speaking out, this week, a judge ordered that he should be deported. This case shines a light on many problems with the broken immigration system, not the least of which is the need for a moratorium on deportations until Congress creates a reasonable path to citizenship. In the meantime, there is one human being who needs you to speak up on his behalf.

Call Secretary of Homeland Security Janet Napolitano and urge her to immediately release Michel Mendy (A087 585 470). Let’s not be a party to continued violence on this young man who has contributed so much and who has suffered enough.