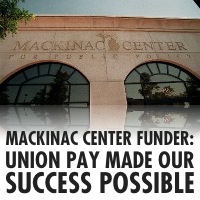 To the far-right, corporations are like people… only better. Last week, Gov. Snyder insisted that we treat citizens like customers, and despite his calls for “shared sacrifice” the only ones sacrificing anything are working Michiganders. This corporate-first mentality pervades every aspect of Michigan government, and if you didn’t know any better you’d think Michigan is a publicly traded company. In Rick Snyder’s Michigan, your opinion only matters if you’re incorporated.

And if there’s one corporate opinion we should listen to, it’s Mackinac Center funder Quality Pool Supply’s. Seriously.

Jack Engelhart, founder of Quality Pool Supply, attributed the success of his business to the higher paying wages of union jobs:

At the time there were quite a few pools going in because General Motors, because of the union, had a very high wage rate and a lot of them were working a lot of overtime and they didn’t have time to go on vacation. So they decided to put a pool in their backyard because the income was relatively high. It was a vacation in their own backyards. We filled a need. It’s a very inexpensive way to go.

Did you get that? Higher wages due to unionization helped get Jack Engelhart’s fledgling business off the ground. Union pay assured there would be demand for Jack’s supply.

Unfortunately, young entrepreneurs trying to start their own business won’t have the same advantages that Jack did, because the Mackinac Center is hard at work removing them. They helped spearhead the passage of so-called right-to-work which, on average, will lower wages by $1,500 for Michigan workers. And if getting paid less isn’t bad enough, Republicans decided it would be swell to advertise this fact on the MEDC website, wooing corporate suiters with “higher potential profits” as a right-to-work state.

It takes real effort to remain this oblivious, so let’s make it so simple even a small child could understand:

Folks wonder why our consumer economy is struggling, but the answer is obvious: you can’t buy things when you’re broke. You know that. We know that. Quality Pool Supply knows that. The Mackinac Center – which prides itself on economic policy – doesn’t. And while they continue promoting policies that benefit corporations, working Michiganders will pay the price.