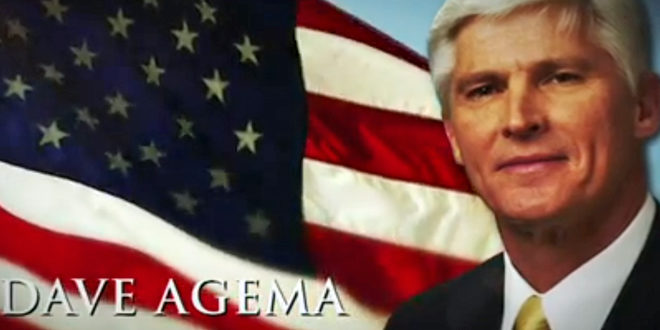 After trying to have it both ways in a weekend interview with WWMT, saying he didn’t write the original post but standing by it, then saying on Facebook he stood by the hateful screed, Dave Agema doubled down in a radio interview he probably thought no one would hear.

The interview was with WPIQ in Manistique, and featured a pair of hosts that enthusiastically agreed with every one of Agema’s offensive assertions about LGBT people. You can listen for yourself, but we’ve excerpted the most outlandish portions below.

1:43: “Dr. Frank Joseph, MD had put together a pretty good list of some of the things you can expect if you’re in that lifestyle. So, this is not a hate thing, what this is is, here’s a whole bunch of statistics, of studies being done that show that this lifestyle has detrimental effects on their health, mentally, all kinds of issues, and it’s substantiated – not just by this individual.”

3:06: “This is going to cause major issues in our economy and in our society if this is passed, and quite frankly, if you look at history, when countries and nations do this it’s the beginning of the end, because you’ve destroyed the family unit, and to me, the family unit is the basic form of government within government.”

4:59: “What I don’t want, if this passes, I don’t want my kids – my grandkids I should say – taught in school that this is an alternate lifestyle. You should accept it. I would rather have them taught, hey look, here’s what happens in this lifestyle. Here’s what’s going to happen to you physically. Here’s what’s going to happen to you emotionally, instead we’re going to teach just the opposite. And I’d like to have it shown, what’s this going to cost society, in our health care costs, and our mental health costs. That’s what I’m lookin at, it’s not about hate, they’re trying to say you’re a bigot if you’re bringing it up and I think that’s what bothers me more than anything. I never such amount of namecalling, threats, and bigotry on their part, calling me a bigot, for bringing up this information. I have never seen anything like it.”

9:06: “We believe in a marriage between a man and a woman. Obama’s saying no, he wants to include homosexual marriage, and so forth.”

10:03: “I’ll tell you what, I know one thing, and this is going to sound probably a little funny but it’s, for me and my household, we will, basically do what the Biblical principles are, and, to me this is a stand we have to take. I’ve been involved in this issue for years, way back when I worked for American Airlines this became an issue, because we had, you know obviously we had a lot of homosexuals in the flight attendant realm, and, uhh, we had issues. I can’t tell you, I’ve been threatened just by speaking out. And that’s the key, they are trying to shut anyone and everyone down from saying anything, that’s what they do. I talked to Gary Glenn with the American Family Association, he says ‘Dave, first thing they’re gonna do is call you every name in the book.’ Yeah they did that. ‘Second thing they’re gonna do,’ he said, ‘they’re gonna call you one of them, and you’re just feeling guilty that you’re actually homosexual.’ Yup, that’s already happened. ‘And then they’re gonna threaten you.’ I said, yup that’s already happened. Matter of fact, when we got that same-sex unmarried bill passed for the, um, state of Michigan, where we would not pay benefits for state employees, for same-sex unmarried benefits, that’s when I got a threat, basically, my wife and I both have to carry because of that. It’s just – disgusting to me, and I just wish our leadership would get behind this, and stand, have backbone, and stand for what our core principles are in the Republican Party.”

14:45: “We have a Constitution, and the progressive judges in this nation are writing law. They really should just be interpreting the law, not writing it. And that’s happening a lot in our lower courts. That’s why I put in that American law for American courts bill last year, because we had foreign law entering our courts. Judges are very important who we put in that position, and Supreme Court justices especially, because they’re put in there for life. However, if they go against the Constitution, technically, our Congress is supposed to eliminate them. That’s a check and a balance, it never happened, but that’s what should happen.

17:13: “Now some people are just gullible because they haven’t read the article. Now if anybody normal person reads this article through, and you can see the guy’s footnotes, or especially the Family Research Council or the AFA, American Family Association, their studies, which are all, 79-80 footnotes, very similar to what this guy wrote years ago, and this study was I think between ’76 and ’95, I can’t remember the exact date. Things have changed since then, there’s more drugs they have to keep them alive longer and so forth. It’s not about hate folks. What it is, is hey, if you’re in this lifestyle, if you really love somebody that’s in this lifestyle, you want to ask them and try to get them out because they’re not going to live as long, it’s going to hurt them emotionally and physically. That’s what it’s about. So it’s really more about caring than it is hate. But what you get thrown back in your face is nothing but hate.”

19:07: “Well, society in general has been tolerant of any behavior that doesn’t affect others in a general stance, but this does affect others. Look at the countries that have accepted it, and some of the states, especially like Massachusetts and so forth, what happens here. What I fear, from this movement most is one, your kids. It’s going to be taught in school, they’re going to come home, that this is okay, it’s a good thing to do. And then if you speak against it what I fear, it will be called a hate crime. And the next thing I fear is they’ll come to your churches and say oh, you won’t marry same-sex couples? Well that’s interesting. This is a hate crime, you just lost your tax-exempt status. This is going to go from one step to the next, it’s part of the plan.”

21:13: “We need to be more involved, just like Obama was, with the college students. Because they are a bit indoctrinated and they come out more socialist than they do capitalistic quite often. And I think there was a study done that in the public schools about 60-70 percent come out of college not believing in their faith anymore that they grew up with. And even in the Christian colleges some of them come out not believing anymore. So, yes there’s indoctrination going on there. But again, I think it’s most important that kids at home with a father and mother are taught what’s right and wrong. I just hope that folks out there understand that this is not just about their rights, that this is going to affect every aspect of our society.”

22:40: “It might’ve backfired just a little bit, because of the push that these individuals are doing, these young people, it’s probably going to draw people more to read the article, which may backfire on them altogether. Because when you look at this stuff, it’s just amazing what’s happening in our society, how fast it’s happened, I mean just 20 years ago, you wouldn’t think this would happen, or 25 years ago, and look where we are now, we’re just like they are in Europe. And some of those studies over there show the same thing, this is not a good thing for us, folks. And all I want to do is maintain our principles, and I want to stay on the conservative side, not on the liberal side.”

NOTE: The radio host that can be heard at 3:59 calling Agema’s Facebook post “indisputable fact” and later levels personal attacks at young Republican activist Luke Londo is Doug Sedenquist. Doug is vice-chair of the Delta County Republican Party and is elected to represent Michigan’s 38th Senate District on the Michigan Republican State Committee.