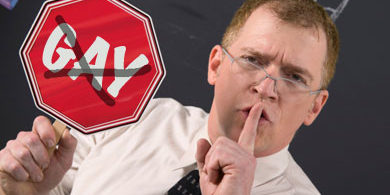 The only national political news big enough to overcome today’s CPAC vacuum was an op-ed written by Ohio Republican Sen. Rob Portman, in which he announced an evolution in his position on marriage equality. His decision was lauded as “courageous” by David Axelrod. He credited his son coming out as gay to him and his wife in 2011 with his “new perspective” on the issue, and said he then thought through his position “in a much deeper way.” Portman’s comments point directly to the vicious and unsettling selfishness that animates the conservative movement; quick to judge those who are ‘different,’ and slow to understand.

If only more Republicans had children who couldn’t get access to affordable health care, or birth control, or a great college education.

Yesterday I had the opportunity to sit in on a legislative briefing conducted by Citizens for Traditional Values, and was surprised to hear scoffs from the audience when Justice Brian Zahra talked about the clear and present danger of empathetic judges.

In the eyes of conservatives (even the mostly religious ones who were in attendance yesterday), empathy is apparently the worst offense one can commit. It opens one’s values system up to possibly allowing support for such compassionate (read: liberal) programs as subsidized health care, aid for the working poor to buy food, and non-discrimination ordinances.

Speaking of non-discrimination, just two months after Sen. Portman’s son came out, he gave a commencement speech at Michigan Law. One hundred students walked out, troubled by Portman’s “openly hostile” views on gay rights. He also has said that businesses should be able to legally fire people because of their sexual orientation, which conservatives believe is an urban legend but actually happened just weeks ago in Michigan. That’s right – in 2013, a woman with no job performance issues was fired from her job, because she’s a lesbian.

Portman told Dana Bash on CNN this morning that he won’t “take a leadership role” on marriage equality in the Republican Party. That’s not courageous. It’s selfish and cowardly, and Sen. Portman should be ashamed.

UPDATE: I was reminded while posting this of Michigan’s Lt. Gov. Brian Calley. Calley, for those who don’t know, is a conservative Republican, staunchly opposed to the insurance mandates in Obamacare. But Calley has a daughter with autism, and led the charge in Lansing to pass a bill requiring health insurance companies to cover childhood autism treatments. The bill was opposed by insurance companies and business groups, and there’s no question it’s laudable that Calley led the charge on getting it through the Republican-dominated Legislature in 2011 and 2012. But it should inspire some empathy in the Lieutenant Governor for families that struggle with other circumstances beyond their control, even if it doesn’t directly affect his family. It should cause the dozens of Republicans who voted for an insurance mandate to question their makers/takers philosophy. The fact that such soul-searching never happened is disheartening.