Pete Hoekstra: On the road (again) and out of touch (again) 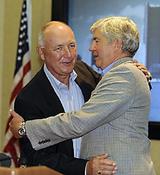 Yesterday perennial candidate (this time for U.S. Senate) Pete Hoekstra hosted a press event called the “Road to Reform” – and used it to boast about his endorsements from the Republican establishment, his shared vision with Gov. Snyder, and years of experience working in Washington. He also spouted off typical GOP talking points about protecting business from regulations – and blamed banking reform legislation for the housing crisis. Imagine a homeowner, angry because his house was burned down and insisting that the fire was started by the firemen who came to put it out.

Unfortunately this is typical of many lawmakers; saying with a straight face that we need less government oversight for the Wall Street bankers who turned the stock market into a casino, burning down our financial system in the process.

Republicans have been defending the same ideas for decades, and all they have to show for it is higher poverty, massive income inequality, and stagnating wages. Currently one in three middle-class Americans is sliding down the income ladder, and the richest one percent control nearly 25 percent of the total income in this country.

Our economy isn’t struggling because of rules that prevent oil companies from dumping toxic waste in our waterways, Wall Street from gambling with our retirements, or big corporations from cutting corners on worker safety. What our economy needs is more consumers with money to spend – a fact that Republicans in Congress refuse to consider thanks to Washington lobbyists-turned-candidates like Pete Hoekstra.